Chromebook 11 is powered by a micro-USB charger 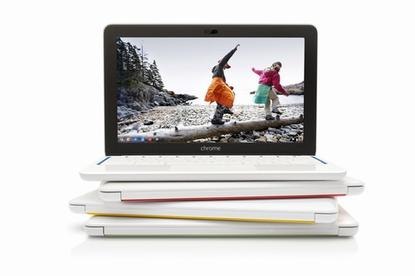 The new Chromebook 11 developed by Google and Hewlett-Packard has gone on sale for US$279, and can be powered by the same charger used for Android tablets and smartphones.

The laptop runs on Chrome OS, and is designed for people who do most of their computing on the Internet. It has an 11.6-inch screen and weighs 1.04 kilograms, making it one of the lightest laptops available.

In a laptop first, it only requires a micro-USB power adapter. That means any charger used to power an Android tablet or smartphone can be used with Chromebook 11.

"When you're traveling, you don't need to throw an extra charger into your bag," wrote Caesar Sengupta, vice president of product management at Google in a blog entry.

The laptop can run for 6.5 hours on a single battery charge. It has a Samsung Exynos processor running at 1.7GHz, 16GB of solid-state drive storage and 2GB of low-power DDR3 RAM. The storage capacity may be small, but Google is offering 100GB of cloud storage for two years at no additional charge.

Chromebooks vary in price from $199 for Acer's low-end C7 Chromebook to $1,299 for Google's high-end Pixel. This is the second Chromebook running on an ARM processor besides Samsung's Chromebook. Chromebooks with Intel processors were shown by Toshiba, Hewlett-Packard and Acer last month and are expected to ship by the end of this year. Lenovo also markets a Chromebook intended especially for schools.

Chromebook 11 will be available on Oct. 20 through Best Buy and Amazon.com in the U.S., and through retailers like PC World in the U.K. It will become available in other countries during the holiday shopping season, Google said.