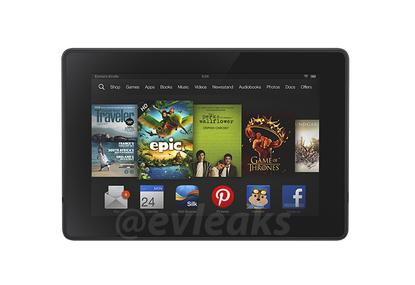 We're expecting Amazon to update its range of Kindle Fire tablets soon and one has been shown in a new leak.

The leak comes via, as many do, evleaks and shows what it describes as "another upcoming kindle". This means it's more likely to be the entry level Kindle Fire rather than the more impressively specced Kindle Fire HD models. See also: Amazon new Kindle Fire HD 2 release date, price and specs rumours.

It's also supposedly going to offer a Qualcomm Snapdragon 800 quad-core processor, three storage options (8-, 16- and 32 GB) and a customised version of Android 4.2.2 Jelly Bean. The leak gave no information about a front facing camera but there's no sign of any such snapper in this leak.

Another strong indication that Amazon will announce new Kindle Fire tablets is the fact that it's dropped the price of the cheapest tablet down to £99, a saving of £30. See also: Amazon Kindle Fire HD vs new Nexus 7 2 comparison review.

There's little that seems compelling about the Kindle Fire 2, but maybe Amazon has something up its sleeve. The Kindle Fire HD 2 tablets, on the other hand, will allegedly boast a 1920 x 1200 matching the new Nexus 7.

Price will again be key for the Kindle Fire 2 range after Google upped the price of the Nexus 7 to £199. We're also keeping an eye on Apple for the launch of the iPad mini 2 which is expected in the coming weeks.