Unexpected, yes, but Google's KitKat marketing may get the word out 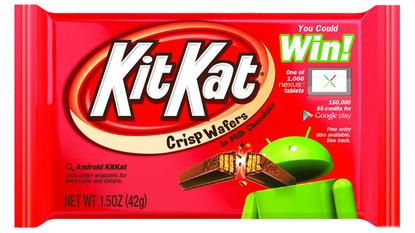 Google's decision to name its new Android mobile OS KitKat left some people scratching their heads Tuesday -- isn't that someone else's trademark? -- but the move could raise awareness about the new software, which could be just what Google needs, one analyst said.

"It's hard for consumers to keep up with the latest version [of Android]," said Carolina Milanesi, an industry analyst with Gartner.

And some people care more about the device it's running on than the OS, she said. Giving its OS a high profile brand name like KitKat might help change that.

Google said earlier Tuesday that version 4.4 of the OS would be called KitKat, "after one of our favorite chocolate treats."

The trademark is owned by someone, of course, but Google partnered with Nestle to do the promotion.

The whole thing was Google's idea, according to a BBC report, and no money changed hands between the companies.

In fact, "KitKat" is not a major departure from previous versions of Android. Each iteration of the software has taken the name of a dessert, like Ice Cream Sandwich or Froyo.

As a result, people aren't always aware what the latest version of the software is, Milanesi said. But the promotional effort with Nestle could help to educate consumers about what the software has to offer, she said.

Google hasn't given any details about KitKat beyond the goal to provide an Android experience that is "available for everybody." The company hasn't said when the software will launch either.

KitKat arrives at a time when Google continues to face challenges with fragmentation. There are several versions of Android in use, across many different devices. Most iPhones, by contrast, run one version of the OS.

Google also has some work to do improving compatibility between apps written for different versions of Android and those written for Chrome on the desktop.

It is unclear whether the latest version of Android will solve any of these problems, but big improvements are needed, according to Milanesi.

If Google was hoping to get more people talking about its latest OS, it didn't pick an ideal day to do it, she noted.

The announcement followed Microsoft's blockbuster news that it would acquire Nokia's devices and services business. And Apple also said it will be holding an event Sept. 10 that is expected to see the release of a new iPhone.