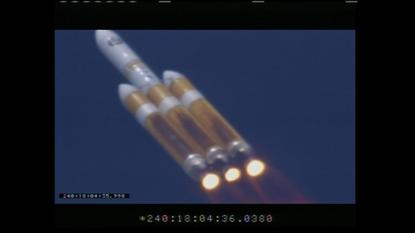 A Delta IV Heavy rocket just after lift off from Vandenberg Air Force Base at 11:03am PDT on August 28, 2013, carrying a classified payload believed to be a U.S. spy satellite. Screengrab from feed supplied by United Launch Alliance.

The launch took place under clear skies at 11:03 a.m. Pacific Time (18:03 GMT) and everything appeared to be going to plan up to the point at which the second stage of the rocket ignited six minutes into the flight. At that point TV coverage was ended at the request of the U.S. National Reconnaissance Office (NRO), which will operate the satellite. (See video of the launch on YouTube.)

No details on the satellite have been released except that it will be operated by the NRO. The office is charged with providing "innovative overhead intelligence systems for national security," in other words: spy satellites.

That's one of the clues to the satellite likely being the newest member of the NRO's Keyhole spy satellite network.

Other clues lie in the warnings sent out to mariners that detail three areas of the Pacific Ocean into which the spent rocket stages will fall back to Earth.

The drop zones provide an indication of the rocket's launch trajectory and that, combined with the launch time, can be used to establish the likely orbit. It's one that closely aligns with the four Keyhole KH11 satellites currently in space, according to Robert Christy, writing on his respected Zarya blog.

The satellite will apparently be launched into a sun-synchronous orbit -- one that's favored for intelligence gathering because it brings the satellite over any point on Earth at the same time each day. That makes it easier to compare images from one day to the next.

Once launched, it will be up to amateur satellite analysts like Christy to confirm its orbit. U.S. Space Command does not include domestic spy satellites on its Space Track service that catalogs satellites and other man-made objects in orbit.

The first KH11 satellite was launched in 1976 and was America's first spy satellite to use digital imaging. Previous generations of satellites had used rolls of film that were dropped back to Earth on parachutes and snagged by planes as they plummeted down.