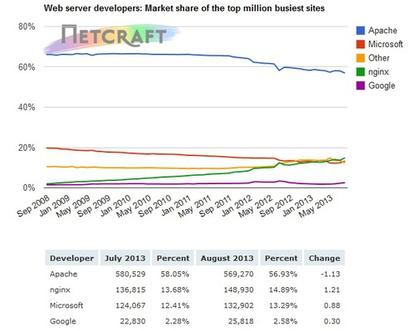 NGINX is now the second most widely used Web server software among the top million web sites, according to Netcraft.

Nginx is releasing a commercial edition of its namesake open source Web server software, called Nginx Plus, which it will market as a software alternative to application delivery controllers (ADCs).

Robertson said that the software will provide functionality similar to that of ADC appliances from F5 Networks or Citrix, which are used to speed delivery of high traffic websites through techniques of load balancing and caching.

Nginx has already made a name for itself as a Web server able to very efficiently handle large amounts of traffic.

Russian system administrator Igor Sysoev released the first version of Nginx in 2004 under a BSD open source license, after becoming frustrated by what he felt were the limitations of the market-leading Apache Web server software.

According to the company, Nginx is now the most widely used Web server software among the world's 1,000 busiest sites. Web heavyweights such as Netflix, Hulu, Pinterest, AirBnB, WordPress.com, GitHub, SoundCloud, Zynga, Eventbrite and Zappos have all used Nginx to serve their sites.

The software now runs about 100 million websites overall, or about 14.55 percent of the Web, according to the latest Internet survey from Netcraft.

Sysoev founded Nginx the company in 2011, and took the role of chief technology officer. Nginx attracted US$3 million in first-round venture capital funding. Currently, it employs about 15 people. Robertson took over as CEO in April; formerly, he was the vice president of global business development for Red Hat, another open source software company.

Under a dual license, the commercial version of Nginx will offer additional features over the freely available open source version.

"Even graceful restarts can affect the operation, and adds slight overhead. [Users] want to change aspects of Nginx on the fly," Alexeev said.

With monitoring, the commercial package provides metrics of a running copy of Nginx, in the JSON (JavaScript Simple Object Notation) format. "You can import these metrics into any standard commercial or open source monitoring system, or you could use your own template through HTML or JavaScript," Alexeev said. The software package also comes with its own metrics dashboard as well.

The health check can alert an administrator when a back-end component of a Web application has failed, such as the database. It does this by comparing the size of a new Web page with the size it should be. It can also automatically take out of service those servers relying on the failing components. Nginx has also collaborated with New Relic to integrate the data generated by health checks to show up in New Relic's application performance management (APM) software.

Other features of the commercial edition include additional load balancing capabilities, and advanced media streaming for Adobe HDS and Apple HLS video formats.

Although Nginx Plus should run on any standard Linux distribution, Nginx has certified that the software runs on Amazon Linux, Red Hat, CentOS, Ubuntu, and Debian distributions.

Nginx Plus will cost $1,350 per instance per year and is available now.