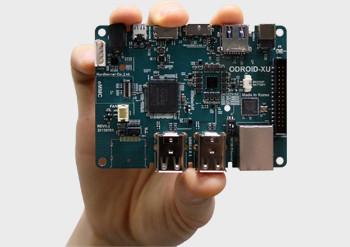 A Samsung eight-core chip used in some Galaxy S4 smartphone models is now available for hackers to play with on a developer board from South Korea-based Hardkernel.

Hardkernel's Odroid XU board has incorporated Samsung's eight-core Exynos 5 Octa 5410 chip, which is based on ARM's latest processor designs. Samsung recently announced a new eight-core chip, the Exynos 5 Octa 5420, which packs faster graphics and application processing than the 5410. The 5420 has not yet been shipped yet, however.

The Odroid board is priced at $US149 until August 31, after which it will be offered for $1US69. Samsung for many months has said that a board with an eight-core chip would be released, and has shown prototype developer boards at conferences.

Odroid-XU will provide developers an opportunity to write programs tuned for Samsung's octa-core chip, which has been a source of controversy. Analysts have said the eight-core design is overkill for small devices like smartphones and tablets, which need long battery life.

The eight-core chip design also takes up a lot of space, which prevented Samsung from putting LTE radios inside some Galaxy S4 models. Qualcomm, which hesitantly moved from the dual core to the quad-core design on its Snapdragon chips, on Friday criticized eight-core chips, calling the idea "dumb."

Despite the criticism, the board will give developers a first true glimpse of, and an opportunity to write and test applications for, ARM's Big.Little design. The design combines high-power cores for demanding applications with low-power cores for mundane tasks like texting and calling.

Samsung's iteration of Big.Little in the Exynos 5 Octa 5410 chip combines four processors based on ARM's latest Cortex-A15 processor design, which incorporates four low-power Cortex-A7 CPUs. The Cortex-A15 is ARM's latest processor design and succeeds the previous Cortex-A9 core, which was used in popular smartphones like Apple's iPhone and the Galaxy S3. Samsung said the eight-core chip provides a balance of power and performance, with the high-power cores kicking in only when necessary.

The board has an Imagination Technologies PowerVR SGX544MP3 graphics processor, 2GB of low-power DDR3 DRAM, two USB 3.0 ports and four USB 2.0 ports. Other features include Wi-Fi, Ethernet and optional Bluetooth. Google's Android 4.2 operating system is preloaded, and support for other Linux distributions like Ubuntu is expected soon. The board has already been benchmarked on Ubuntu 13.04.