But the full picture of what went wrong is impossible to know for now, according to analysts 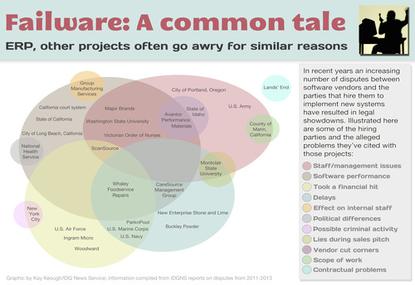 Many failed software projects seemingly share similar reasons for their lack of success.

Infor has been sued by a customer who claims an ERP (enterprise resource planning) project that was supposed to take six months instead allegedly dragged on for well over a year without any useful results.

Buckley Powder, a Colorado company that offers explosives and other products for mining and construction firms, entered an agreement with Infor in December 2011, according to the suit. Under its terms, Infor was supposed to install its SX.e software at Buckley, which had been using another Infor system called TakeStock. Both applications handle processes related to wholesale distribution.

The work was to take no longer than 180 days, but now 18 months has passed with no working system in place, Buckley said in its suit, which was filed last week in U.S. District Court for the District of Colorado.

Instead, "the project has been plagued by setbacks and non-performance on behalf of Infor and no reasonable solution has been presented," the suit states.

After Buckley notified Infor that it planned to terminate the parties' agreement, Infor "made a final attempt to provide yet another failed attempt at performance of its obligations by submitted a wholly unreasonable and unacceptable implementation schedule," and Buckley rejected the proposal, the suit adds.

Buckley has paid Infor more than US$185,000 and is seeking the return of that money as well as interest, attorney's fees and other costs.

An Infor spokesman declined to comment on Buckley's lawsuit Tuesday.

Infor is one of the industry's largest ERP vendors after SAP and Oracle, having grown through a long series of acquisitions. In recent years, it has tried to entice customers running older systems to migrate to newer ones though its Flex upgrade program, which offers rapid implementation services and calls for minimal or no additional software license fees. It wasn't immediately clear on Tuesday whether Buckley's project was done through the Flex program, however.

It's also unclear exactly what led to the project's alleged problems. The ERP project industry in general is plagued by delays and cost overruns, resulting in many other lawsuits similar to Buckley's.

Systems integrators have come under fire in these cases for allegedly providing inexperienced consultants to work on projects, resulting in disarray and missed deadlines. But customers have also borne their share of blame, such as for failing to provide proper requirements and not making the right people available to work on the implementation.

As for Buckley's suit, "I don't think we have enough details from either [side]," said analyst Ray Wang, CEO of Constellation Research.

There are a few possibilities, such as a lack of available staffing on either Infor or Buckley's part, he speculated. In addition, there may have been delays in procuring the necessary hardware for the upgrade, although "18 months is a long time," Wang said.

Buckley's lawsuit "is vague and does not specify what Infor did wrong aside from not implementing the system on time," added analyst Michael Krigsman of consulting firm Asuret, via email. While Buckley's claim could have merit, "the absence of detail suggests either ignorance of the details or an attempt to evade responsibility by placing all blame on the vendor," Krigsman added.