Luminos will compete with other solar-powered cars in a 3,000-kilometer race in October 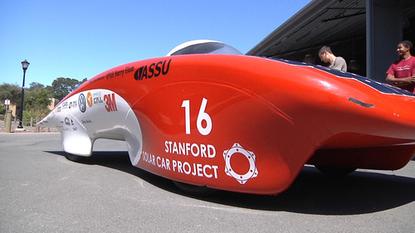 Students at Stanford University unveiled their latest solar-powered car on Tuesday, two weeks before it will be shipped to Australia to take part in the world's premier solar vehicle race.

The car, called Luminos, sits low to the ground and has a long, curved body that's covered with solar panels. The curved body is key to its aerodynamics and allows it to generate less than half the drag of a cyclist while cruising. The driver sits in the middle of the vehicle, mostly within its shell, but can see the road through a small canopy that sticks up from the center of the car.

Luminos cruises almost silently at 45 miles per hour (72 kilometers per hour) when its solar panels are in full sunlight, and will keep going throughout the daytime, said Max Praglin, an electronics engineer with Stanford's Solar Car Project. The car's batteries have enough charge to take the car 150 to 200 miles when sunlight doesn't provide enough power, he said.

(See video of the car unveiling and driving on YouTube.)

The World Solar Challenge begins Oct. 6 in Darwin, in Australia's Northern Territory, and has attracted 47 teams from 26 countries. The race will cover 3,000 kilometers, reaching Adelaide on Australia's southern coast on Oct. 13.

The route runs through the hot and harsh interior of the country, which will provide the cars with plenty of sunshine but also test their endurance.

"With Australia, you never know," said Jason Trinidad, one of the drivers of the Stanford solar car. "It's very little like any place on Earth."

The race rules require teams in the Challenger class -- the most popular of three classes and the one in which Stanford will compete -- to get as far as they can each day by 5 p.m. At that time, they have to pull over and camp in the desert until resuming the race the next morning. All teams must be fully self-sufficient on their journey.

The Stanford team has already been testing its car in California's Central Valley, where the roads are long and flat and the temperatures high. Several tests over the past two weeks have put 700 miles on the car, and more tests are planned before the car is shipped. However, the California tests don't allow the team to test for everything they will encounter in Australia.

"Darwin is very humid and we can't replicate that here," said Trinidad.

In the California tests, the worst thing that went wrong was a burst tire, he said.

For the driver, the car has few of the creature comforts of a conventional automobile. There's not even a dashboard -- the car's speed and other parameters are communicated via a display on the steering wheel.

"We have cruise control to optimize the drive, so it can be a little boring, but it's always cool to know you're driving the solar car," said Trinidad.

It's Stanford's third solar car to be entered in the race. The first two, Apogee from 2009 and Zenith from 2011, sit around the corner from the Stanford team's garage, gathering dust while the new car is built and tested.