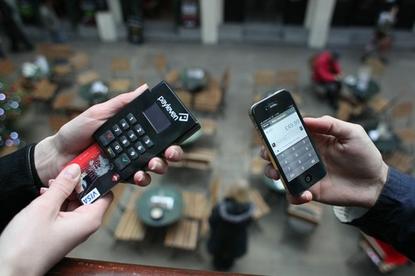 Payleven chip-and-PIN reader in use

Mobile payments startup Payleven has struck a deal that calls for Apple to start selling chip-and-PIN readers in its retail stores across Europe.

Payleven's chip-and-PIN reader can be connected to an iPhone, iPad or Android device via Bluetooth, allowing users to take payments from major card providers such as Visa and MasterCard. The device can be used anywhere where a mobile or Wi-Fi connection is available and is intended to be used by small businesses and sole practitioners such as plumbers, electricians or outdoor market stalls, Payleven said in a news release Thursday.

The device is available for £99 (US$150) and has no fixed monthly fee. Payleven charges 2.75 percent per transaction.

"Anyone who wants to buy one can go to an Apple retail store in London right now and get one," said a Payleven spokesman.

Payleven is active in Germany, the U.K., the Netherlands, Italy, Poland and Brazil. The Payleven spokesman declined to say when the readers would be available in other countries.

IZettle offers its services in Norway, Sweden, Denmark, Finland, Germany, the U.K. and Spain. Elavon is available in the U.K. and Ireland.

Apple did not reply to a request for comment.