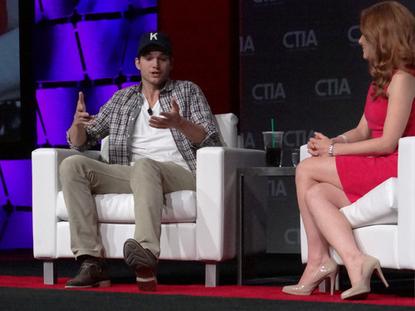 Ashton Kutcher was interviewed by CNBC reporter Julia Boorstin in a keynote session on the final day of CTIA Wireless.

Internet communities are more trustworthy than some big corporations, but mobile is proving a hard nut to crack even for the best of them, actor and venture capitalist Ashton Kutcher told CTIA Wireless Thursday.

"Facebook is the new religion," Kutcher said. "It's a deeper trust bond that I have with someone." Mass religions rose along with large cities and became a way for people to trust neighbors they didn't know, Kutcher said. Facebook creates trust by turning strangers into "friends of friends," Kutcher said.

The same principle applies to online housing exchange Airbnb, which Kutcher said he was skeptical about at first but finally invested in. Having a friend vouch for someone or having other consumers give them good ratings online has proved as safe or safer than trusting corporate services, Kutcher said.

"We've had less crime in Airbnb than the hotels around the world, by far," Kutcher said. It was one of numerous times Kutcher mentioned companies in which he has a stake. His list of venture investments includes Spotify, Foursquare, Flipboard and Dwolla.

But the early and well-known Twitter user said that service isn't what it once was, a forum for personal communication.

"The media kind of f----ed it up," Kutcher said. "Companies and people just constantly pitching crap." He also blamed the Retweet button, which made it too easy for users to multiply posts from others. Both developments have changed the "signal-to-noise ratio" and made it harder to use Twitter, he said.

Kutcher, who has 14.3 million followers on Twitter, admits he won't hesitate to promote an upcoming movie through social media. "I'm just as guilty as everyone," he said.

The biggest challenge for mobile apps and services is the speed of transferring data, Kutcher said. The complexity of having to leave one app for another or download an app just to see something a friend brings to your attention are also problems. "I don't think anybody's mastered mobile," he said.

Cellular carriers themselves may be in trouble if they don't get a foothold in Wi-Fi and Internet calling, Kutcher said. Traveling in Europe and Israel recently, he was startled by text messages updating him on how much cellular roaming was costing him. Kutcher found himself waiting until he got in range of a Wi-Fi network and using Internet Protocol voice and messaging services. He thinks mobile operators should buy companies like Skype or risk consumers taking an end run around them.