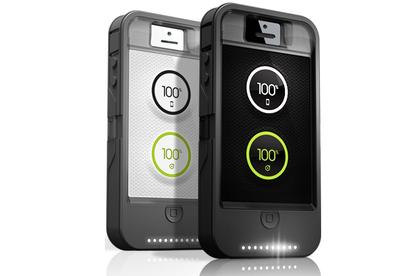 US accessories company Otterbox is well known for producing some of the best protective smartphone cases on the market. Its latest product, the Defender with iON Intelligence, combines a rugged case with a built-in battery and also works with a free battery extender app.

The Defender Series with iON Intelligence case (yes, it's really called this) claims to double the battery life of your smartphone. The initial iPhone version, which has been designed for the iPhone 4 and iPhone 4S, has a 1450mAh battery built-in. That's a bigger battery than the one that comes with both the iPhone 4 (1420mAh) and the iPhone 4S (1432mAh) so the claims of double the battery life are likely to be correct, at least from a technical perspective.

The key feature of the Defender with iON Intelligence case is the way it will charge your phone. There's a strip of LED lights at the bottom of the case which indicate how much battery power is left. The case will only ever start topping up your phone battery when it dips below a certain percentage. Unlike other battery cases, there's no need to switch it on.

The case itself will be part of Otterbox's Defender range. It has a triple-layer of protection consisting of a built-in screen protector, a polycarbonate shell and a silicon-skinned outer layer with port and plug covers that provide dirt and dust protection but not water resistance. The Defender range of cases add significant bulk to any smartphone but they are widely considered one of the best protective smartphone cases on the market.

The case has been designed to work with Otterbox's new iON Intelligence app, which is a free download in Apple's App Store and the Google Play Store. The battery usage app estimates and predicts battery power and battery time remaining by monitoring device usage habits.

A promotional video of the Defender Series with iON Intelligence case can be viewed below.