Max Payne 3 “Deathmatch Made in Heaven” DLC out now 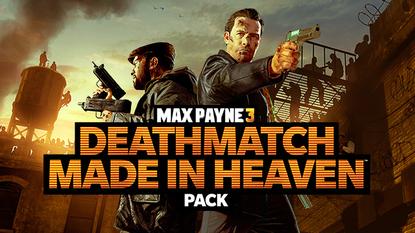 Rockstar Games has released its Deathmatch Made in Heaven DLC Pack for Max Payne 3.

The pack is available for free to Rockstar Pass owners, or for 800 Microsoft Points on Xbox LIVE and $15.95 on PlayStation Network and PC.

The DLC comes with four all-new co-op and competitive modes for multiplayer, as well as new close-combat weapons, items, and achievements.

Dead Man Walking is a two player co-op mode where Max and Passos fight endless waves of enemies using teamwork and skill, while Run & Stun mode puts one random player in the role of the Saci, Captain Baseball Bat Boy's nemesis, to try and turn all the other players to his side.

Marked Man mode awards extra points in deathmatch for exacting revenge on players, as well as surviving Vendettas placed on you, and Time Attack mode consists of gathering kills before time runs out.

A new single-player Challenge Arcade mode tests the players across each level of the game’s story with various challenges, such as headshots, explosive kills and others.

The Deathmatch Made in Heaven Pack also has new close-combat weapons, items, in-game accomplishments, and more.