Vodafone will sell the Samsung Galaxy Note II from 5 December 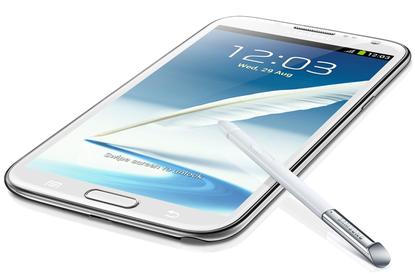 Vodafone has today announced pricing and release date details for the hotly anticipated Samsung Galaxy Note II, with the device set to officially go on sale through the carrier from Monday 5 December.

The carrier confirmed today that the Galaxy Note II will be available in-store and online from Monday 5 December, though it's not currently listed on the Vodafone Web site.

The Galaxy Note II will be available on a range of Vodafone plans, including $10 per month on the $50 Plan over 24 months for a total of $60 per month. The plan includes $500 worth of calls, SMS and MMS messages and 750MB of data, though Vodafone includes a bonus 500MB of data for the first 12 months.

"Our customers are loving the 'phablet'- big is sometimes better and this certainly is the case when it comes to the Samsung Galaxy Note II," said Vodafone's general manager of devices, Katie Turkal.

Vodafone is the second carrier in Australia to announce pricing plans for the Galaxy Note II. Optus announced its pricing plans for the device almost two weeks ago and currently lists the Note II for order on its Web site. Telstra will also sell the Galaxy Note II in Australia, but revealed last week that the phone won't be available until "early 2013".

Samsung officially unveiled the Galaxy Note II earlier this month at a media event in Sydney, where it was announced the device would sell for $899 outright. The model launching in Australia is the N7105 version that features 1800MHz 4G connectivity, so the device will work on the Telstra and Optus 4G networks in Australia and will support Vodafone's 4G network when it launches sometime in 2013.

Unveiled internationally back in August at the IFA (Internationale Funkausstellung) consumer electronics trade show in Berlin, the Galaxy Note II is the successor to the original Galaxy Note smartphone. It has a larger 5.5in screen, a faster, quad-core processor and runs Google's 4.1 'Jelly Bean' version of Android.

Like the original Galaxy Note, the Galaxy Note II comes with an "S Pen" stylus that allows users to take notes, draw onto the screen and annotate images and PDF files.

The Galaxy Note II has been available in Europe, Asia and the Middle East for a number of months and was officially released in the US in late October.