Apple has announced an event on September 12 where it is expected to reveal the iPhone 5. 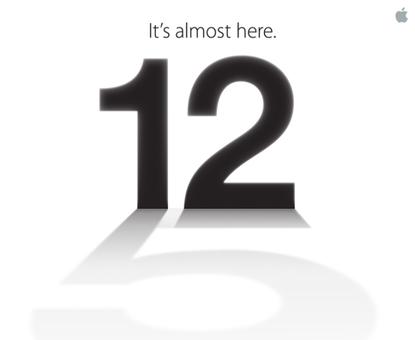 Apple's invitation sent to the media for an event on September 12.

Apple has announced an event on September 12 where it is expected to reveal the hotly-anticipated iPhone 5. What can we expect?

The company sent invitations to the media overnight for an event at the Yerba Buena Center for the Arts in San Francisco. This venue is typically used for new Apple product launches.

Like always, Apple has been light on details. The invitation sent to the media is simply titled "It's almost here" and has a large '12' in the centre to denote the event date, September 12.

Curiously, the shadow appearing under the number '12' is the number 5. This strongly suggests that Apple will be launching the iPhone 5. Before the invitation was sent out, many rumours suggested the device could simply be called the "new iPhone". Apple dropped the number naming convention for the iPad earlier this year, calling it the "new iPad" rather than "iPad 3".

The Apple event is scheduled for Wednesday September 12 and will kick off at 10am San Francisco time. For us Aussies, that translates to a starting time of 3am on Thursday September 13.

The iPhone rumour mill has gone into overdrive in the past few months. Some of the widely expected new features are:

• A taller, 4in screen, up from the 3.5in screen on the iPhone 4S. The screen is expected to have a 16:9 aspect ratio with a resolution of 1136 x 640.
• A two-tone design that uses an aluminium back panel rather than glass and has strips across the top and the bottom of the back.
• A smaller dock port, likely to be an 8-pin connector, replacing the traditional iPhone dock connector.
• A bottom mounted headphone jack, moving away from the top mounted jack on the current iPhone.
• Redesigned speaker grills at the bottom of the handset.
• LTE 4G connectivity.

The last point is the key one for Australians. There is no doubt that the iPhone 5 should feature LTE connectivity, but whether the phone will support the 1800MHz LTE network bands used by Telstra and Optus remains to be seen.

A 4G capable iPhone that works in Australia would come at a time when Australia's two largest telcos are significantly ramping up their 4G offerings. Optus yesterday launched its 4G network in Sydney, Perth and Newcastle with 4G services in Melbourne starting from September 15.

Last week, Telstra announced that it is currently expanding its 4G mobile network coverage, promising to cover 66 per cent of the Australian population by mid-2013. It has also promised to launch five 4G smartphones before the end of 2012. Yesterday's announcement of the Samsung Galaxy S III 4G in October is the first, could the iPhone 5 be the second?

When is the iPhone 5 likely to be available in Australia?

With that in mind, you can expect the iPhone 5 to be available in Australia as soon as its available in the US. Using last year as a guide, Apple announced the iPhone 4S on October 5 and released the phone in stores on October 14. Apple traditionally likes Friday for iPhone launches, so Friday September 21 is a good bet.

Where will I be able to buy the iPhone 5 from?

The iPhone 5 will once again be available from all three major telcos in Australia — Telstra, Optus and Vodafone. It should also be available on Virgin Mobile, just like the current iPhone 4S.

Like the current iPhone, the iPhone 5 should also be sold outright through Apple's Retail Stores, including the Penrith and Hornsby stores in New South Wales. Of course, the iPhone 5 will once again be sold through online store.

What do you want to see in the iPhone 5? Vote in our poll below and tell us!

• Could this be the iPhone 5?
• Is this the iPhone 5?
• In Pictures: Back from the EDGE - a look at the evolution of the iPhone
• Apple slates September 12 event, hints at iPhone 5
• iPhone 5 rumor rollup for the week ending August 31