Samsung not behind "Wake up" campaign 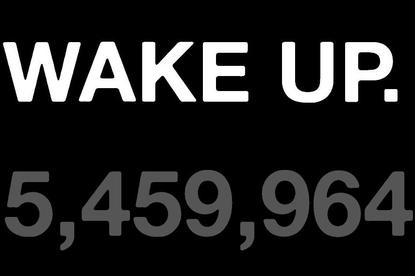 Samsung Australia has officially denied it is behind the "Wake up" publicity stunt that saw a mob of protesters campaign outside the Apple Store in Sydney last week.

In a statement sent to Australian technology media this afternoon, Samsung admitted it is not behind the campaign, despite many media outlets in Australia and across the globe reporting otherwise.

"It's great to know we're front of mind with parts of the media as well as a good few bloggers when it comes to discussing campaigns like "Wake up", said Arno Lenior, Samsung Australia's corporate marketing director.

"As a market leader in smartphones we think Australians have already woken up to the multitude of choices available, but kudos to whoever is behind the campaign - clearly its captured significant attention in the market and we are as keen as everyone else to discover who is behind it."

"As ever, we look forward to providing all Samsung fans (and potential recruits) with even more freedom of choice in the future through our innovative range of smartphone devices."

Last Thursday, a black bus with "Wake up" emblazoned on the side pulled up outside Sydney's Apple Store in George Street where around 50 people dressed in black protested in front of the store. The protesters were dressed in black and held up placards with the slogan "Wake up" printed on them, chanting at bemused customers and staff inside the store.

The Wake up slogan was also displayed at the bottom of Sydney's Bondi Ice Bergs pool, as well as on a number of billboards. The media campaign also appears to have its own web site, wake-up-Australia.com.au, which counts down days, minutes, hours and seconds. The countdown timer is scheduled to end on Sunday 6 May 2012 at 2:59pm.

Yesterday, Macworld suggested that embattled BlackBerry maker Research in Motion (RIM) may be behind the stunt, after it discovered some interesting source code from the Wake up Web site.

Samsung will broadcast"The next Galaxy" media event live on its official Facebook page.

A video of last week's "Wake up" protest can be seen below.