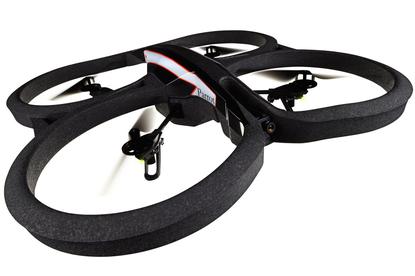 French company Parrot has today revealed details of its AR.Drone 2.0 "quadricopter", a successor to the original AR.Drone. The AR.Drone 2.0 boasts an improved design, a new control system and a HD camera that records 720p video.

The new AR.Drone 2.0 will sell for $349 and will be available through "leading retailers" in Australia including Dick Smith Electronics (DSE) and EB Games. Parrot says the unit will hit the shelves "sometime in June" but did not confirm a specific launch date at the media event today in Sydney.

The Parrot AR.Drone 2.0 is a unmanned aerial vehicle (UAV) that uses Wi-Fi technology to connect to an iPad, iPhone or iPod Touch where it can be controlled. The device is a follow up to the original AR Drone which launched in Australia in late 2010 and was sold through Telstra and FoneZone stores.

Parrot claims the AR.Drone 2.0 boasts a number of improvements over the original model, headed by 720p HD video capture. The on-board camera allows users of the quadricopter to capture both still photos and high definition video, neither which was possible on the original model. Users can also save images or videos on a USB key through a USB port hidden next to the battery.

The AR.Freeflight app, a free download for iOS devices, allows users of the AR.Drone 2.0 to upload any captured videos directly to YouTube, or still photos to Google's Picasa service. The app features a redesigned interface and a media manager to handle images and video captured with the chopper. Parrot says it expects "hundreds of thousands of videos" from the AR.Drone 2.0 being uploaded and shared across the Internet once the device is launched.

A new pressure sensor allows the AR.Drone 2.0 to fly higher than the previous model (up to 6 metres), while Parrot also claims an upgraded 3-axis gyroscope and a new 3D compass makes the product easier to control and fly. The company also claims the use of a more power efficient CPU.

"The flying experience of the original AR.Drone was difficult," said Julien Galou, Parrot's global product manager for AR.Drone. "We still offer this mode for experienced flyers but the new mode makes flying the device much easier. We wanted to put it in everybody's hands," he explained.

The basic controls on the iPhone, iPad, or iPod touch remain the same: the AR.Drone 2.0 is controlled by holding a virtual joystick in the app and tilting the from side to side using the gyroscope on the device. Galou confirmed an Android app is currently in the works and Parrot expects it will be ready in time for the Australian launch in June.

The AR.Drone 2.0 weighs the same as the original model (420g with indoor hull, 380g with outdoor hull) but Parrot claims the use of carbon fibre tubes, nylon plastic and foam makes for a stronger device overall. "We identified the weak points on the hull and reinforced them to make the product stronger," explained Galou.

The AR.Drone 2.0 hasn't seen an increase in battery life: it once again lasts for up to 12 minutes of flying time before needing a 90 minute recharge.

Check out a demonstration of the Parrot AR.Drone 2.0 at today's media launch, along with Parrot's promotional video for the new chopper below: