Samsung introduced its 2012 TV range last night, with a total of 44 LED and plasma televisions to be made available over the next year. 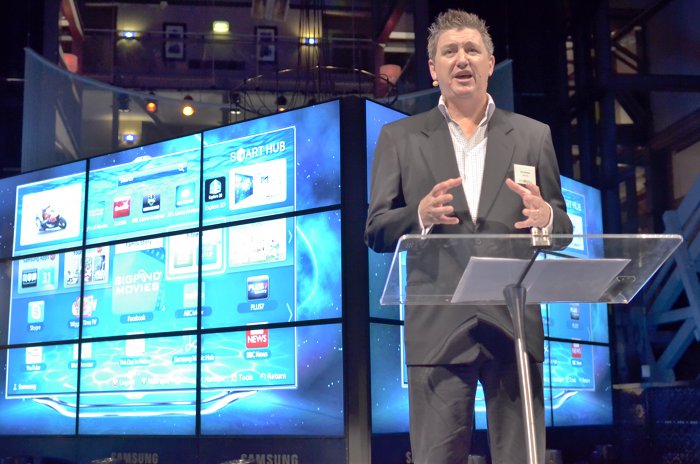 Slim LEDs are Samsung’s heroes — the company began producing edge-lit LED TVs in 2009 — and the majority of 2012’s TVs will use this technology. Models from the top-of-the-line Series 8 ES8000 in 65in, 60in and 55in sizes, down to Series 7, 6, 5 and cheaper Series 4 TVs will be available from April onwards. 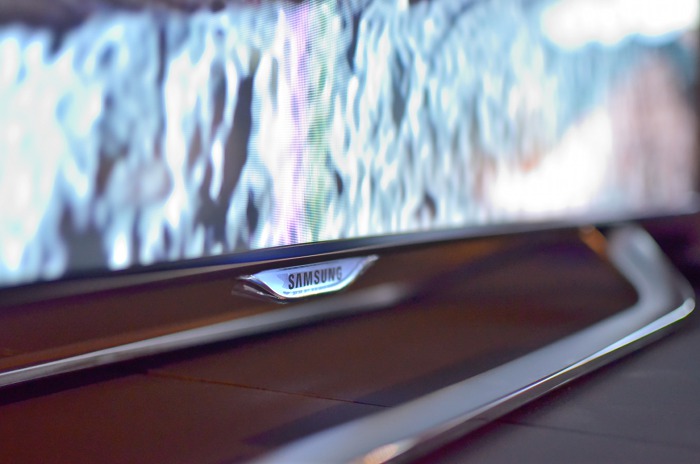 Half as many non-slim LED TVs will also be released, using thicker chassis to cut costs. These Series 6, 5 and Series 4 TVs will target budget buyers, along with a single no-frills Series 4 LCD TV using a non-LED fluorescent backlight.

The company is also releasing several plasma TVs this year. Six size and model variations will be produced — down from 10 last year, another nail in the coffin of plasma — and will include a range-topping Series 8 in 64in and 60in sizes as well as cheaper Series 5 and Series 4 models.

23 of 35 slim LED TVs, 4 of 13 LED/LCDs, and 4 of 6 plasma TVs incorporate some or all of Samsung’s Smart TV technology. These features range from voice and gesture control, to a range of exclusive content deals, to compatibility with future upgrade kits.

Smart Interaction is the control element, primarily using voice and gesture to replace or complement a traditional remote control. Users can speak to the Samsung Smart TV using a range of predetermined phrases (“Hi TV”, “Volume up”, “Channel down”, and so on) to access basic functionality. The voice control also works with free-text input in the inbuilt Web browser — a user can speak any phrase, then cloud-based voice recognition will translate the audio into text input.

Gesture control uses TVs’ inbuilt camera to recognise an outstretched hand and fingertips, which can then be moved around as a mouse cursor on-screen. Clenching the hand into a fist ‘clicks’ the mouse.

This service uses SugarSync cloud storage and offers 5GB of storage to user for each Samsung device they own. For example, a viewer could use their Samsung tablet on 3G or Wi-Fi to remotely watch a TV show recorded on their Samsung Smart TV.

Smart Content integrates the company’s range of apps and Web browsing software into this year's Smart TVs. Part of the Smart Content package includes a subscription partnership between Samsung and Foxtel which will come in the form of an IPTV app suite in July, with starter, sports, movies and entertainment packages. 2012 Series 7 and Series 8 Smart TV owners will be able to watch the Olympics on eight exclusive Smart TV channels in July as well.

Smart Evolution uses a port on the back of compatible TVs to allow users to install additional hardware. These Smart Evolution kits will be released yearly from April 2013 onwards, and will include additional processors or circuitry to enhance a TV’s picture quality or to enable future software features in line with that year’s current Smart TV sets.

The cheap upgrade kit is tipped to cost $149, though it is not clear whether this is only next year’s price and whether future software features will come at an additional price. While the Smart Evolution-compatible segment of Samsung’s 2012 TV range uses dual-core processors, the 2013 Smart Evolution kit will likely include a daughterboard with a quad-core processor.

A full list of Samsung TVs to be released in 2012, with specifications and model sizes, has been reproduced below. Click on each for a full-sized picture.