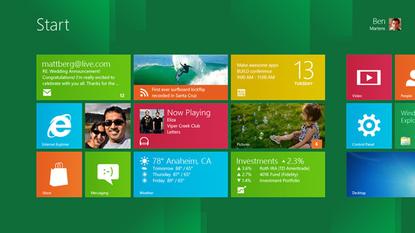 Microsoft's long-awaited deeper look at Windows 8 has piqued consumer interest, according to a company that scores online news and social media trends.

Interest in Windows 8 exploded on September 12, the day Microsoft held a two-and-a-half hour demonstration of the new operating system, said NetBase Solutions, a Mountain View, Calif. firm that tracks online coverage and social media comments about brands and products for a wide range of industries, including technology and entertainment.

The percentage of positive mentions about Windows 8 quickly climbed starting Tuesday, said NetBase, ending at above 60% by the close of Wednesday. Negative comments made up about 20 per cent of the total.

"[It] seems like people are impressed with this move, not only because of the actual technology but also the message that Microsoft seems to be sending to their competitors and the marketplace with this release," NetBase said in a statement.

Not surprisingly, the mentions and comments garnered by Windows 8 crystalized around the usual Microsoft versus Apple argument, with many of those applauding the new operating system's "touch-first" approach as a win for users who don't like Apple's iPad.

"Windows 8 will be the death of the iPad!" crowed one of the Twitter messages NetBase called out.

"Remember, the people who think Windows 8 just killed the iPad are the same who thought Windows ME was the best OS ever," said a tweet, referring to the abused Windows Millennium of 2000.

"Dislikes for the Windows 8 tablet focus around how it does not support Adobe Flash and how it's not that easy to use ... but there are many more positives than there are negatives," noted NetBase.

As evidence of Windows 8's popularity, CEO Steve Ballmer boasted yesterday morning that 500,000 copies had been downloaded in the first 16 hours of its availability.

Microsoft posted the preview on its website around 5 p.m. PT on Tuesday.

It's impossible to compare that number against the download tally of Windows 7's first public beta -- released in early January 2009 -- because while Microsoft initially said it would limit the Windows 7 beta to 2.5 million people, it later ditched that restriction and never cited download stats for the preview.

The Windows 8 developer preview can be downloaded from Microsoft's website.