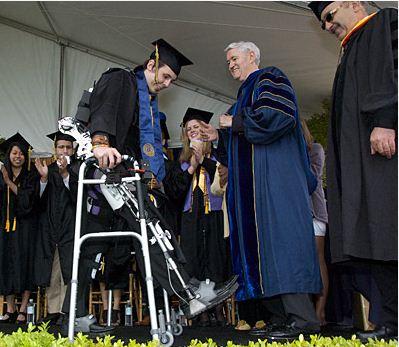 Graduating senior Austin Whitney, a paraplegic since 2007, walks toward Chancellor Robert Birgeneau (in blue) and Professor Homayoon Kazerooni at UC Berkeley's Commencement ceremony with the help of an exoskeleton. (Steve McConnell photo)

Thanks to university researchers and a metal robotic exoskeleton, a paralyzed student at UC Berkeley was able to walk across the stage to receive his diploma over the weekend.

Graduating senior Austin Whitney , a paraplegic since a 2007 car accident, used a walker with a control switch directing the exoskeleton strapped around his legs. While he was walking across the stage -- to great cheers from fellow graduates and the audience -- Whitney was followed by the researchers who built the robotic device allowing him to once again move his legs.

"The second I pressed the button and stood up, I was flooded with a series of emotions," Whitney told UC Berkeley's media office . "It was overpowering.... I've stood in the [exoskeleton] machine a lot of times before, but I knew that it would be different up here [on stage], and it truly was."

The robotic exoskeleton is the creation of Homayoon Kazerooni, a Berkeley professor of mechanical engineering, and his team of researchers. The university engineers have been creating exoskeletons, or wearable robots in the form of leg braces, to help paraplegics walk again.

Kazerooni began his work in 2000 when the Defense Advanced Research Projects Agency (DARPA) funded his research to help soldiers carry heavy loads for longer periods of time. The research team unveiled that military-focused machine in 2004. Then in 2010 researchers took the wraps off what they dubbed eLegs, an exoskeleton specifically designed to help paraplegics.

There has been an increasing amount of research going into creating agile and strong exoskeletons in the past several years.

That exoskeleton, which is worn much like the suit in the movie Iron Man, is built to be used in medical rehabilitation or to help people who have suffered a stroke or spinal cord injury, for example. It also could be used for people doing physically demanding work in factories or at disaster sites, according to Cyberdyne.

HAL reportedly could make a wearer two to 10 times stronger than normal.

In a related area, researchers at the University of Washington announced in 2008 that they were working to reroute brain signals in an effort to give paralyzed people the ability to move their limbs again. Scientists said they were restoring voluntary movement to the once-paralyzed limbs by creating an artificial connection between muscles and the brain's nerve cells.

Also in 2008, an international group of scientists successfully used a monkey's brain activity to control a humanoid robot . Miguel Nicolelis, a professor of neurobiology at Duke University and lead researcher on the project, said at the time that the research may only be a several years away from helping paralyzed people walk again by enabling them to use their thoughts to control exoskeletons attached to their bodies.

With UC Berkeley's recent work on exoskeletons, researchers said robotic exoskeletons generally share similar elements: mechanical braces that can be strapped onto the user's legs and body, motorized joints controlled by actuators, electronic sensors, a computer processor that orchestrates the movements and a battery power source.

"If you cut down on the number of motors, you can cut down on the number of sensors needed, which in turn simplifies the device and leads to lower cost, but this also makes the exoskeleton motion control more complicated," Jason Reid, a researcher on the exoskeleton team, said in a written statement. "Sophisticated motion control adds little, if anything, to the cost of production, but it requires a great deal of research and creativity at the design stage. That is what we are doing."

Sharon Gaudin covers the Internet and Web 2.0, emerging technologies, and desktop and laptop chips for Computerworld. Follow Sharon on Twitter at @sgaudin or subscribe to Sharon's RSS feed . Her e-mail address is sgaudin@computerworld.com .