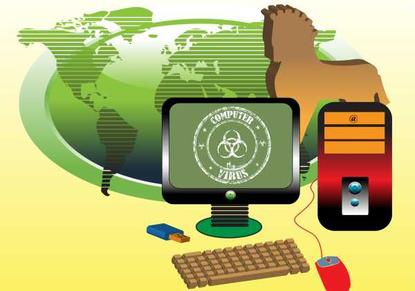 Hackers today stepped up their use of Osama Bin Laden's death by shoving malware into PCs when users fall for phony claims of photographs and video, security researchers said today.

"It's not really surprising," said Mikko Hypponen, the chief research officer of Helsinki-based F-Secure. "We were expecting to see related malware."

Earlier today, F-Secure warned users to steer clear of spam that included the "Fotos_Osama_Bin_Laden.zip" archive attachment. The messages claim the file contains photos of Bin Laden after he was shot and killed by U.S. special forces during a 40-minute firefight in his compound in the northern Pakistani city of Abbottabad.

Running the resulting Windows executable file doesn't display photographs, but instead launches a new banking Trojan horse belonging to the three-year-old "Banload" line, said Hypponen. The malware sniffs out online banking sessions and then tries to redirect payments to other accounts.

Today, Symantec said it had found email messages touting photos and video of the U.S. attack's aftermath. The messages, which so far have been written in French, Portuguese and Spanish, lead users to a fake CNN Web site where they're told to download video.

As in the F-Secure instance, the download is, in fact, a "dropper" that in turn downloads malicious code to the Windows PC.

Bin Laden scams are also spreading quickly on Facebook, Hypponen and others said.

The latest scam plays on the reputation of Wikileaks, the organization that has leaked thousands of U.S. military and diplomatic messages during the last year.

"Osama is dead, watch this exclusive CNN video which was censored by Obama Administration due to level of violence, a must watch," claims the Facebook spam. "Leaked by Wikileaks."

According to U.K.-based Sophos, the Facebook messages don't play video of the al-Qaeda leader's death, but actually dupe users into copying and pasting a line of JavaScript into their browser's address bar.

"Any time you paste a script into your browser's address bar, you're effectively running code written by the scammers without the safety net of protection," said Graham Cluley, a Sophos senior security technology consultant, in a post to his company's blog Tuesday. The JavaScript shares the bogus news of the video with all of a user's Facebook friends by posting it to their "walls."

Hackers and scammers are able to rapidly ramp up attacks whenever a major news story breaks because they're simply tweaking existing malware or schemes, said Hypponen. And some of their processes are even automated.

"The [search engine poisoning] is fully automated," Hypponen said, referring to the tactic where hackers and other cyber criminals pollute search engine results with pages containing links to malicious sites.

"They automatically generate pages with worthless content, or sometimes with no content at all," said Hypponen. "This works especially well when the news hasn't yet been covered by a normal site. It's possible for anybody to get their page within the top 10 [results] by being fast enough."

Hypponen expected that cyber criminals will continue to exploit Bin Laden's death for some time to come. "They usually keep trying longer than it actually works," he said. "Most people won't be falling for [such scams] for very long, but the video might work for a while, because I wouldn't expect the U.S. to release a real video."