Which is the better tablet -- Apple's iPad 2 or Motorola's Xoom? Apple's iPad 2 may be flying off the shelves, but the coming months will see a number of challengers aiming for a slice of the tablet pie. The latest is the Motorola Xoom Android tablet, which will launch exclusively through Telstra in May.

Read our comprehensive iPad 2 review and Motorola Xoom preview, and check out our guide to the best upcoming tablets in 2011.

Computerworld: Which tablet should I buy? Motorola Xoom vs Samsung Galaxy Tab 10.1v

The Motorola Xoom is equipped with a 10.1in touchscreen and runs the latest version of Google's Android 3.0 'Honeycomb', software which has specifically been designed for tablet devices.

With this in mind, how does the Motorola Xoom stack up against the iPad 2 when it comes to specifications?

The new iPad 2 is faster, thinner and lighter than its predecessor. The iPad 2 is 33 per cent thinner than the original iPad, weighs 613g, and comes in both black and white models. The curved design of the back of the iPad 2 makes it comfortable to hold, and it is relatively thin given the size of its screen. The iPad 2 is ideal for use in either portrait or landscape layouts, and its built in accelerometer rotates quickly and without delay.

The Motorola Xoom Android tablet features an attractive, industrial-looking black metal finish on the back and sides, and a front that taken up almost entirely by the 10.1in touchscreen. The Xoom is clearly designed to be used more in landscape mode than it is in portrait, though it can be rotated using a built-in accelerometer. At 730g, the Xoom is significantly heavier, thicker and larger than the iPad 2, which may be a deal-breaker for frequent commuters.

The Motorola Xoom has an industrial-looking design that features an attractive black metal finish on the rear and sides, but at 730g, its significantly heavier than the iPad 2.

The 9.7in display of the iPad 2 is bright, crisp and clear and really brings content to life, particularly photos and videos. Though the iPad has the same oleophobic screen coating as the iPhone 4, its larger size means a few taps on the display quickly results in a grubby mess that is hard to clean. The iPad 2 also has another serious flaw — its display is virtually impossible to see in direct sunlight, which is a huge issue on a device that's designed for portability and travel.

The Motorola Xoom has a slightly larger display at 10.1in, and its resolution of 1280x800 pixels is an improvement over the iPad 2's 1024x768 display. We are yet to get our hands on the Xoom, so we can't comment on its performance in direct sunlight.

The iPad 2 runs Apple's iOS4 operating system. It offers a familiar swipeable home screen enhanced by folders, and the consistent Apple UI look and feel extending across all of the standard applications. If you have never used an iPad before, you can expect a device that is easy to pick up and use, a well-populated App Store, and excellent multimedia capabilities. Web browsing is fast and efficient, and the iPad 2 is also a great device for viewing photos, watching videos and listening to music.

Though the streamlined iPad experience has won many fans, Apple's closed platform means the iPad 2 doesn't offer the same flexibility as Android tablets like the Xoom. In particular, the iPad 2 has an inferior notification system to Android tablets, and Apple doesn't allow you to customise and display live widgets on the iPad 2 home screen. By the same token, the iPad 2 interface and overall user experience are far more polished than what is currently on offer from Android tablets. The iPad 2 feels much faster and smoother than any Android tablet we've tested.

The Motorola Xoom runs Android 3.0 "Honeycomb", a new version of the Android platform that is optimised for tablet devices. Android 3.0 has a completely redesigned interface that aims to take advantage of the larger screen of a tablet. These new UI features include an "action bar", a contextual option group displayed at the top of the screen, five customisable home screens, recent apps for easier multitasking, a redesigned on-screen keyboard, a new browser and an improved copy and paste function. Android 3.0 Honeycomb also includes tabbed Web browsing, and support for 3D graphics. The new Android software for tablets is a huge improvement over earlier versions, but still lacks the polished and slick feel of the iPad 2. 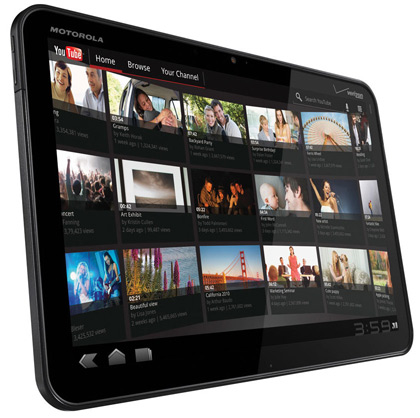 The Motorola Xoom runs Android 3.0 "Honeycomb", which offers a completely redesigned interface aiming to take advantage of the larger screen of a tablet.

The Apple iPad 2 is powered by a dual-core processor called the A5. Apple claims the processor doubles the speed of the iPad 2 and makes graphics processing up to nine times faster. Apple hasn't specified the amount of RAM the iPad 2 has, but it is generally assumed to be 512MB.

The Apple iPad 2 also includes two cameras; one facing the front of the tablet, the other rear-facing. The rear camera records 720p HD video, and takes still photographs, but both cameras have low specifications — the front camera is VGA, while the rear camera is just 0.7 megapixels. Both cameras can be used with Apple's FaceTime video chat application, which debuted on the iPhone 4.

On the other hand, the Motorola Xoom Android tablet has a significantly better 5-megapixel rear camera on its rear that also doubles as a 720p HD video recorder, and a 2-megapixel front camera for video calls. The Xoom can also claim to be a more powerful device than the iPad under the hood — it is powered by a 1GHz dual-core processor, has 1GB of RAM, 32GB of internal memory, and a microSD card slot for extra storage. The Motorola Xoom also has one other significant advantage over the iPad 2 — its Web browser can display Flash video content.

Motorola has promised 10 hours of video playback time before the Xoom's battery runs out. We'll be keen to put this to the test, as the iPad 2 is claimed to offer a battery life that equals the Xoom's.

The Apple iPad 2 is available through Apple retail stores and select authorised resellers. The iPad 2 is slightly cheaper than the original iPad, starting at $579 for the entry-level 16GB Wi-Fi version.

The Motorola Xoom will be available in May exclusively through Telstra. Pricing and availability has yet to be announced.

What do you think about the Apple iPad 2 and the Motorola Xoom? Let us know in the comments below!