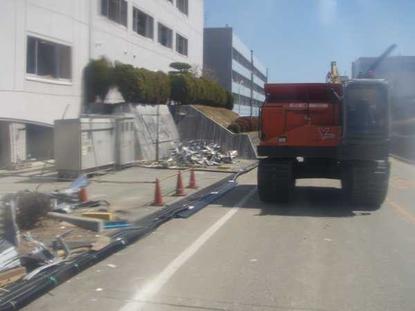 Removal of debris at Fukushima Daiichi nuclear power plant by remote-controlled vehicle on April 6, 2011. This image shows the area before work began.

The effects of the magnitude-9.0 earthquake, a tsunami estimated at around 15 meters high, and two hydrogen explosions in reactor buildings have left the Fukushima Daiichi site covered in rubble and debris, according to images released by Tokyo Electric Power (TEPCO). Some of the debris has high levels of radioactivity, complicating its removal and the movement of workers around the site.

The machinery consisted of an excavator and transporter, each equipped with a remote control system. Cameras were mounted on each piece of equipment and TEPCO set an additional six cameras around areas where work would take place.

The entire operation was managed from a mobile control room where staff could watch video from the cameras and manipulate the machinery, said Hiro Hasegawa, a spokesman for the electric utility.

The clearance operation began when both units rolled into place near an debris-strewn area. The excavator, which had been fitted with a giant grabber hand, picked up debris and dropped it into a container on the back of the transporter. It took about 2 hours for this to be completed.

Once full, the excavator knocked closed the lid of the container and the transporter trundled to a temporary dump site. The Fukushima Daiichi plant, like other nuclear power plants in Japan, was built with plenty of open space so the debris can be temporarily collected together on-site, said Hasegawa.

The unloading operation took about an hour to complete, and then the cycle began again.

The remotely controlled machinery was originally developed for use in hazardous construction environments, such as those near volcanos or where landslides could occur, said a spokesman for Yoshikawa Co, which worked on the system.

The radio control system typically has a range of about 300 meters, but this time a radio relay station was used to boost the signal and allow the controllers to be up to 2 kilometers away, the Yoshikawa spokesman said.

TEPCO has also been used remotely controlled drones and helicopters to get a close-up view of the reactor buildings. The company received pictures from a US military Global Hawk drone, and reports say the RQ-16 T-Hawk micro unmanned air vehicle is also being used.