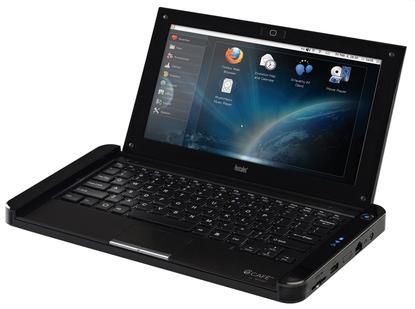 The Hercules eCAFE netbook has an ARM processor and runs Linux

The eCAFÉ Slim HD is billed by the company as the slimmest and lightest model in its category, while the eCAFÉ EX HD was designed to offer the best battery life on the market. Both feature an ARM Cortex-A8 processor and a custom Linux-based operating system along with an unusual design in which the screen folds into the body for extra protection.

Due in April, the 10-inch netbooks will be offered at suggested retail prices of $229 and $269, respectively.

At 1.1 inches thick and 2.4 pounds, meanwhile, the EX HD model is built just slightly larger and yet features 13 hours of battery life in real use conditions, Hercules says. An HDMI port and multimedia touch controls are designed to make it easy for users to watch videos on their TVs.

Applications are grouped by theme, and they include a full, Office-compatible productivity suite, an audio player and music manager, a video player compatible with most formats, and an instant messaging system.

Taking the Linux-friendliness even further is the eCAFÉ Sync application, which lets users connect their netbook to their main computer -- whether it runs Linux, Windows or Mac OS X -- via an included mini-USB cable, enabling quick and easy file transfer.

After years of a product landscape more or less dominated by Windows-only choices, it's great to see manufacturers increasingly offering customers alternatives. Tablets, laptops, all-in-one PCs and netbooks are all among the devices to emerge running Linux in recent months, giving individual and business users a way to get off the Microsoft treadmill at last.