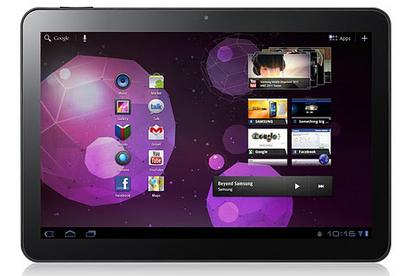 Samsung today announced that its latest tablet device, the Samsung Galaxy Tab 10.1v, will be available exclusively through Vodafone in Australia from "mid-April" for $729 — but for a "limited time only."

Read our Samsung Galaxy Tab 10.1 hands-on, and check out our guide to the best upcoming tablets in 2011.

As its name suggests, the Samsung Galaxy Tab 10.1v has a 10.1in display with a resolution of 1280x800. The original Galaxy Tab had a smaller, 7in display, so the new model will compete directly with the upcoming iPad 2, which goes on sale this Friday in Australia, starting at $579.

The Samsung Galaxy Tab 10.1v runs Android 3.0 Honeycomb, which has specifically been designed for tablet devices. The software doesn't come with any UI overlays and is instead a "vanilla" version of the Honeycomb OS. Key features of Android 3.0 Honeycomb include tabbed Web browsing, support for 3D graphics, added enterprise features like encrypted storage, a redesigned keyboard, and completely redesigned interface that aims to take advantage of the larger tablet screen.

The Samsung Galaxy Tab 10.1v Android tablet also features a rear 8-megapixel rear camera that doubles as a 1080p HD video recorder, a 2-megapixel front camera for video calls, and dual-speakers. The Galaxy Tab 10.1v is powered by a 1GHz dual-core processor, has 1GB of RAM and 16GB or 32GB of internal memory, but there is no microSD card slot for extra storage. It has a standard 3.5mm headphone jack, but uses a proprietary charging and synchronising port; the same port used on the original Galaxy Tab.

Like its Samsung Galaxy S II Android phone, the Samsung Galaxy Tab 10.1v is made from sturdy feeling plastic, and features a carbon-like finish on the rear. The tablet devices manages to remain lightweight at 599g.

"Vodafone is thrilled to offer our customers the first to market Samsung GALAXY Tab 10.1v, operating on the highly anticipated Android 3.0 'Honeycomb' platform", said Ross Parker, general manager of devices and pricing at Vodafone. "The Samsung GALAXY Tab 10.1v is an exclusive limited edition enabling our customers to experience first the full mobile entertainment experience on the ultimate Android 3.0 platform."

The Samsung Galaxy Tab 10.1v will be available for a limited time only, both online and in selected Vodafone stores. The device will cost $729 as an outright purchase which includes 6GB data with a three month expiry, or a $259 upfront payment, plus $39 per month over 12 months. The latter includes 1.5GB of data per month.

Samsung also announced two new tablets in a global launch overnight — a lesser specced version of the Galaxy Tab 10.1 (with the same name minus the v) and the Galaxy Tab 8.9. Both tablets are 8.6 millimeters thin, making them the "thinnest mobile tablets available," while they also feature Samsung's TouchWiz user interface implemented on the Android 3.0 Honeycomb platform. The Samsung Galaxy Tab 10.1 and Galaxy Tab 8.9 devices are expected to be available in Australia in Q3, but pricing has yet to be announced.