Apple to unveil iPad 2 on March 2 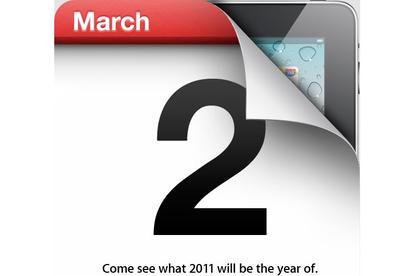 Apple will unveil the iPad 2 on March 2 (Image credit: Engadget)

Rumours about the Apple iPad 2 have been flying thick and fast of late, and Apple has responded by setting the record straight: the iPad 2 will officially launch at a media event on March 2.

Read our comprehensive iPad review and check out our guide to the best upcoming tablets in 2011.

The above image, sent with the media invitation, shows a current generation iPad covered by a March 2 calendar date which appears to be peeling away from the top right-hand corner.

According to rumours, the iPad 2 will be thinner and lighter than the original, and will come with a faster processor, more memory and a more powerful graphics processor.

The second-generation iPad is also expected to have a front-facing camera in order to utilise Apple's Facetime feature, but its display will be similar to the first iPad's, ruling out the inclusion of Apple's Retina display used on the iPhone 4.

The timing of the iPad 2 launch is expected to impact significantly on the hype surrounding the Motorola Xoom Android tablet, which launches in the US this week.