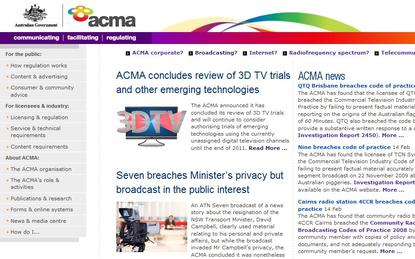 The Australian Communications and Media Authority (ACMA) has concluded a review of consumer, reception, interference and technical issues surrounding the broadcast of 3D TV in Australia. The Australian regulatory body has released a new set of guidelines for further trials of 3D TV broadcasting in Australia, which it will continue to consider and authorise on a case-by-case basis.

Should you buy a 3D TV? Have a look at our 3D TV buying guide.

Find a full list of our 3D TV reviews.

A media release on the ACMA Web site states the regulator's position on 3D TV broadcasts — that the transmissions are still in their infancy, and any further trials until the end of 2011 must be short-term and involve significant viewer awareness programs.

A statement from ACMA chairperson Chris Chapman mentions the necessity of educating the public while allowing trials to take place. "Providing appropriate safeguards are in place to protect consumers' interests, the ACMA will continue to facilitate industry’s deployment of 3D TV and other evolving technologies in the period to the end of 2011.

"The ACMA also decided that any further trials must be of a short duration, and broadcasters will be required to give the ACMA undertakings on measures that will assist consumers to understand that trial broadcasts are temporary and will only be available in a limited number of locations."

The free broadcast spectrum space used to transmit the 3D TV trial channel, which was employed in 2010 for the State of Origin, the 2010 FIFA World Cup and both the AFL and NRL grand final matches and the AFL grand final rematch, only exists as a result of delays in the Australian switchover to digital TV. During the transition to digital TV a 'restacking' process will see spectrum allocations shuffled in order to free up space for wireless services, which will include the channel currently used to broadcast 3D TV trials. Later in 2011, the ACMA will review its approach to allocating the currently-empty spectrum space.

New procedures and guidelines for the transmission of 3D TV have been laid out on the ACMA Web site. A major consumer concern cited was the previous trials' lack of geographical coverage, despite the 3D TV trial channel spectrum being available throughout most of Australia. Retailers were also contacted by the ACCC for misrepresenting the availability and coverage of 3D test transmissions.

Until the ACMA reconsiders the 3D TV trial spectrum allocation later in 2011, it will continue to consider applications from broadcasters to show events in 3D. The new guidelines state trial broadcasts should generally be no longer than a month in length, with a clear break between separate trials. Broadcasters will also likely be required to run on-air advisories to educate consumers, and any partnered retailers must release information on the limited scope and length of the trials.