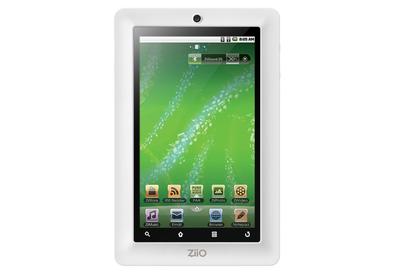 Creative Labs on Tuesday announced entry-level media tablets with 7-inch and 10-inch touchscreens, with prices ranging from US$249 to $319.

The Ziio Pure Wireless Entertainment tablets come with Google's Android 2.1 OS and storage ranging from 8GB to 16GB. Some models are priced lower than Archos' 101 Internet Tablet and Velocity Micro's Cruz tablet, which are priced at $299.

The tablets will start shipping in early December, Creative said.

Creative is primarily known for its portable media players, speakers and headsets, and has built the tablet to its strengths. The company says the tablet is able to sync with its audio products via Bluetooth to play music. The device includes an audio application and an Apt-X codec to achieve quality audio streaming and playback.

Beyond music, users will be able to check e-mail, surf the Web or play casual games, Creative said. Applications are offered through the company's ZiiStore.

The tablet is powered by the homegrown ZMS-08 processor, which is based on a 1GHz Arm processor and can play 1080p video. The device comes with an HDMI (high-definition multimedia interface) port to play video from the tablet on high-definition TVs. It also comes with a MicroSD card slot for additional storage.

The device comes with a front-facing camera and has Wi-Fi capabilities. The company says the device can play back up to five hours of video on a single battery charge.