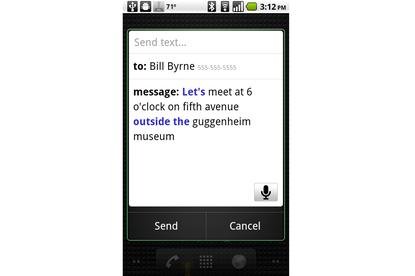 Voice Actions for Android is a series of commands that let you control your phone using your voice. The feature lets Android smartphone users to call businesses and contacts, send texts and e-mail, listen to music, browse the Web, and complete other tasks including creating notes, setting alarms and getting directions via Google Maps.

The Voice Actions function can be activated by tapping the microphone button on the Google search widget (if it is on your home screen), or by pressing the physical search button on your phone to bring up a "Speak now" screen. This works in a similar manner to Google Voice search, which has been available on a range of smartphones for some time, including Android phones, the iPhone and BlackBerry smartphones.

Voice Actions requires the latest version of Android 2.2 (Froyo) and is only available in English at this stage. The most popular Android smartphones in Australia, the HTC Desire (sold exclusively through Telstra) and the Samsung Galaxy S (sold exclusively through Optus) both run the 2.1 version of Android. HTC claims the Desire will be upgradeable to Froyo in September, while Samsung hasn't set a firm timeframe for the Galaxy S to be updated.

Check out the quick overview of the feature by Mike LeBeau, the lead engineer for Voice Actions:

Let us know what you think in the comments below!