Reports have emerged that Samsung will introduce a 7-inch, Android-based tablet called the Galaxy Tape. 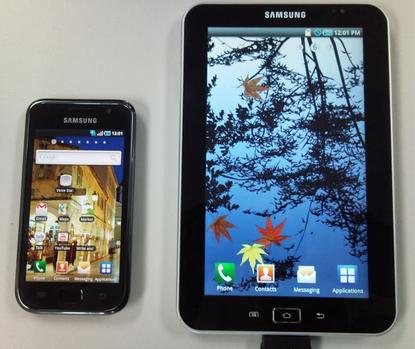 Samsung is second only to Nokia in global cell phone sales, and recently posted record earnings. However, like Nokia, Samsung has had little to offer in terms of next-generation mobile devices like cutting edge smartphones or tablets...until now. Samsung is jumping into the tablet fray with the Galaxy Tape, expanding the array of tablet devices for businesses to choose from.

Samsung is just the latest tech company rumored to be jumping on the tablet bandwagon. In the wake of the tremendous success of the Apple iPad--selling more than two million units in only two months, there are many other tablets predicted for later this year. The HP Hurricane is expected to run on the recently acquired Palm WebOS. RIM is reportedly working on a BlackBerry tablet. Then, there are Android-based tablets like the Dell Streak, and this Samsung Galaxy Tape.

Galaxy Tape? It was previously rumored under the name Galaxy Tab--which at least makes a little more sense--but "Tape"? What kind of tape? Duct tape? Masking tape? A measuring tape? The word "tape" does not invoke images of cutting edge technology and leads me to wonder if the branding got lost in translation somewhere.

Silly name aside, the specifications of the Samsung tablet device seem impressive enough. The 7-inch flat panel device will reportedly be powered by a 1.2GHz A8 processor running Android 2.2--a.k.a. "Froyo". It will have 16Gb of built-in storage--expandable up to 48Gb with a microSD memory card slot. And, the device is expected to weigh in around 13 ounces.

Two elements that stand out about the Samsung Galaxy Tape are the Super AMOLED display, and the Samsung TouchWiz UI. Super AMOLED delivers a brighter, clearer, less reflective display experience. Compared with other display technologies, Super AMOLED is better in outdoor, or direct sunlight conditions.

The other thing that can set the Samsung Galaxy Tape apart from competing tablets--even from Android-based tablets like the Dell Streak--is the custom TouchWiz UI. TouchWiz The interface has received some mixed reviews on older smartphone platforms, but

Like the Dell Streak, the smartphone on steroids is apparently literally a smartphone with a thyroid problem. The image of the Samsung Galaxy Tape shows a phone icon, implying that the device will be capable of making voice calls. You might look a little silly holding a 7-inch tablet up to your ear, though. While it does blur the line between smartphone and tablet like the Streak, the larger 7-inch display at least puts it more clearly on the tablet side of that line.

The success of the Samsung Galaxy Tape will depend on how well Samsung develops the hardware and software, but it will also hinge on pricing, and perhaps on which network or networks will support it. Pricing and availability are sketchy right now, although it is expected by late 2010.