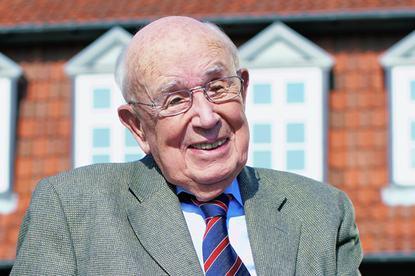 Late during the evening of 17 May 2010, only a few days after his 98th birthday, Professor Fritz Sennheiser, audio pioneer and founder of today’s Sennheiser electronic GmbH & Co. KG, passed away.

Under his guidance the first shotgun microphones and open headphones were created and he oversaw important developments in wireless radio and infra-red transmission.

It was completely natural for Fritz Sennheiser to give his developers the creative and technical freedom they required.

His humanity also shone through when – considering the significant workload involved in running an expanding company – he took time to share his knowledge with students, inspiring them with an enthusiasm for audio technology.

In 1982 he retired from the management of the company, handing over to his son, Prof. Dr. sc. techn. Jörg Sennheiser.

Fritz Sennheiser continued to take a strong interest in the company he founded in summer 1945.

His enthusiasm for audio technology, his creative curiosity, coupled with a modesty that is all too rare these days, his self-discipline, sincerity and generosity in his dealings with people, will remain an example to follow for all those who knew him.