So far 2010 seems to be the year of Google Android. HTC has already flown the flag with its impressive flagship Desire smartphone, but Sony Ericsson's XPERIA X10 has also generated plenty of positive buzz. The long-awaited Sony Ericsson XPERIA X10, which is the company's first Android phone, boasts two unique features — Timescape and Mediascape — that set it apart from other Android handsets.

With this in mind, how does the XPERIA X10 shape up against the iPhone 3GS? Does Sony Ericsson's first Android smartphone compare favourably with Apple's juggernaut, or does it fall short? We take you through the key features of this latest smartphone battle.

The Sony Ericsson XPERIA X10 is slightly larger and thicker than the iPhone 3GS, mainly due to its 4in display; the iPhone has a 3.5in LCD screen. The XPERIA X10 is constructed almost solely from sturdy plastic and its curved shape feels great in your hand. Some may be irked by the XPERIA X10's plastic body, but compared to the iPhone it doesn't fall too far short. Having said that, the use of plastic is a little disappointing when you consider the price of the XPERIA X10 ($1099). We also think the iPhone's design is starting to look a little dated — it remains sleek, well built like all Apple products, but we think it's in need of a facelift to keep up with the competition. 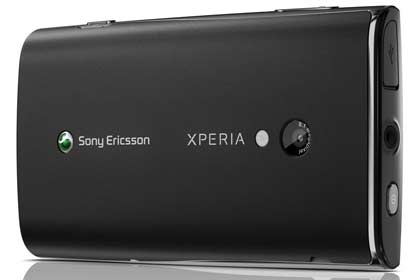 The Sony Ericsson XPERIA X10 is constructed largely from plastic, but its curved shape feels great to hold.

The Sony Ericsson XPERIA X10 has a massive 4in display. The XPERIA X10 may lack the AMOLED technology used in the HTC Desire, but its screen still manages to beat the iPhone 3GS in both size and quality. The display is crisp, bright and clear and when sitting side by side with the iPhone, it's a clear winner. However, the iPhone 3GS' oleophobic screen coating makes it better at combating fingerprints, and the XPERIA X10's display is difficult to see in direct sunlight.

Both of these smartphones use capacitive touch screens (so a stylus isn't required) but only the iPhone 3GS supports multitouch, allowing users to use gestures like pinching and squeezing the screen with two fingers to zoom. Sony Ericsson may provide multitouch technology when it updates the XPERIA X10's software to the latest version of Android, but this is still unconfirmed. Though a lack of multitouch isn't a deal-breaker, its presence makes the iPhone better for browsing the Web, scrolling through photos and using applications like Google Maps.

The Sony Ericsson XPERIA X10 has a 4in capacitive display: one of the largest mobile phone screens currently available.

The iPhone 3GS naturally runs Apple's proprietary iPhone software. A huge part of this is the App Store, offering access to more than 150,000 mobile applications, all specifically designed for the iPhone. The iPhone OS is lauded for its ease of use and design, and it's not hard to understand why. A great phone is just as much about its software as its hardware, and Apple has clearly found a winning formula. Apple's latest 4.0 software update will also add new features to the iPhone when its launched in June — including the ability to multitask and create personalised folders for downloaded applications.

Competing directly with Apple's App Store is Google's Android Market. The Android Market is still only in its infancy but as of March 2010 has 30,000 apps available. To give you an idea of the potential and growth of the Android market, Google announced in December 2009 that the Android Market had over 20,000 apps, meaning it has grown by 10,000 apps in just three months. The Android OS allows multitasking, and there is much more scope for personalisation and customisation, not only from an end user's perspective but also from a developer point of view. This is a huge advantage the Android platform holds over the iPhone.

Much of the iPhone's appeal lies in its user interface. Using the iPhone feels natural; transitions between screens are superb, animations are excellent and the overall ease of use is outstanding. The iPhone 3GS also feels quite responsive, though newer smartphones like the HTC Desire are even faster.

In theory, the Sony Ericsson XPERIA X10 should be faster and more responsive than the iPhone — it is powered by a 1GHz Snapdragon CPU, the fastest mobile processor available at the moment. However the phone feels sluggish, especially when using Sony Ericsson's Timescape app. A central timeline of events on both your phone and social-networking sites like Facebook, Timescape groups all your communications into 3D boxes that appear to be stacked on top of one another — the idea being that you simply flick your finger up and down the "spine" to scroll through everything. Though Timescape sounds good in theory and looks absolutely superb, it is sluggish, often jerks when sliding from screen to screen and has a few limitations that prevent it from being the deal clincher it should be. 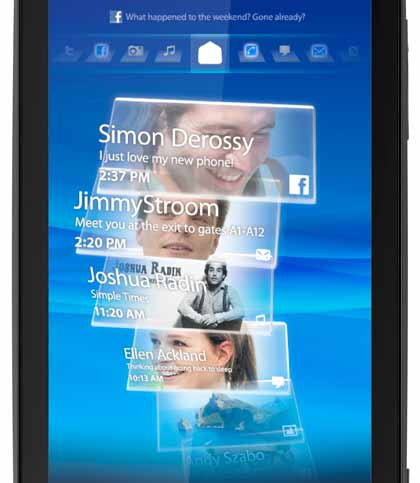 Sony Ericsson's Timescape application has been billed as a key feature of the XPERIA X10, but the phone's hardware struggles to keep up with this flawed piece of software.

The iPhone's iPod integration is one of its outstanding features. Music and video playback is simple and easy, and the iPhone 3GS added video recording and MMS messaging. Though most Android smartphones on the market can't compete when it comes to multimedia, the Sony Ericsson XPERIA X10 is undoubtedly the best we've seen thanks to its Mediascape application. Mediascape stores and plays all multimedia including music, videos and photos. Conveniently, you can access your online snaps (through services such as Facebook and Picasa) using the photos menu and you can also download album art for your tracks over Wi-Fi. There are still no advanced settings beyond basic playlists, repeat and shuffle modes, but Mediascape undoubtedly makes the XPERIA X10 the best multimedia Android smartphone on the market. 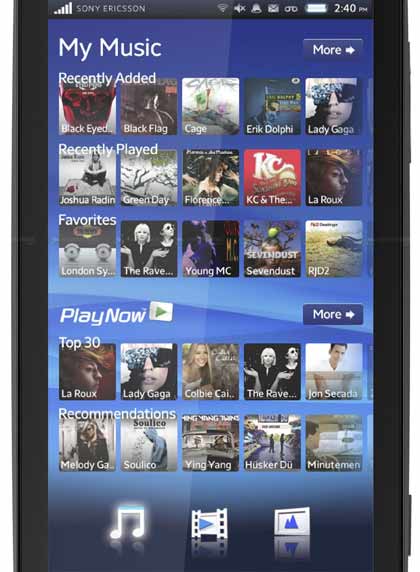 Mediascape is exclusive to the Sony Ericsson XPERIA X10 and stores and plays all local and online multimedia including music, videos and photos

The iPhone 3GS and Sony Ericsson XPERIA X10 have similar specifications. Both phones are 7.2Mbps HSDPA-capable, and both have GPS, Wi-Fi and a standard 3.5mm headphone jack. The iPhone holds a slight advantage with options of 16GB or 32GB of internal memory, though there is no external storage slot. The XPERIA X10 has 1GB of internal memory, but Sony Ericsson ships the smartphone with an 8GB microSD card. The XPERIA X10's 8-megapixel camera with LED flash leaves the iPhone's 3.2-megapixel camera with no flash for dead, but the iPhone boasts TV-out capabilities with the purchase of an extra cable accessory.

The iPhone doesn't have the XPERIA X10's Timescape or Mediascape applications, nor the ability to customise the home screen with widgets and shortcuts, but Timescape is ultimately flawed and sluggish and the iPhone's multimedia capabilities remain one of its best features.