3D LED TVs in store from April 19, 3D plasma TVs available in May 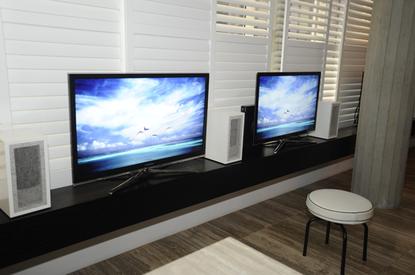 Samsung's 2010 plasma and LED televisions will be released from April 19 onwards.

Australian retailers will begin selling Samsung's 3D LED televisions from April 19, with 3D plasma televisions available from the start of May.

While the high-end Samsung Series 8 and Series 9 televisions will be released later in the year, the mainstream Samsung Series 7 model is the first 3D television to be sold in Australia. Samsung's Series 7 models are priced competitively, with the 50in Series 7 plasma the cheapest 3D TV available from the manufacturer. The 50in PS50C7000 Series 7 plasma television will be available for a recommended retail price of $2499, with 58in and 63in models costing $3499 and $4499, respectively. Samsung's Full HD 3D LED televisions carry a significant price premium over plasma models, with the 40in UA40C7000 Series 7 LED television priced at $2899. The 46in version will cost $3699, while the flagship 55in model will cost $4799.

The new television models are able to display 3D content when delivered through a 3D Blu-ray player such as Samsung's BDP-C6900, which will cost $599. Samsung glasses are required for viewing 3D content. Pairs with a rechargeable battery will cost $129 each; glasses with a replaceable lithium battery will cost $99. Two pairs of glasses will be bundled with each television set. While only a native 3D Blu-ray disc will give viewers the best image quality and perceived depth of field, Samsung's televisions use a 2D-to-3D adaptation process to convert regular video content into 3D. The process adds some depth to content but is not as immersive as native 3D viewing.

Until the end of May, every Samsung 3D television will come with a 3D Blu-ray version of Monsters vs. Aliens.