Red Faction: coming to a cinema near you? 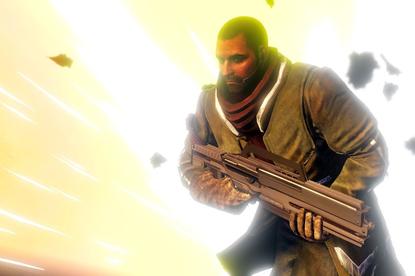 THQ's popular destruction-based shooter series, Red Faction, may be receiving a movie adaptation. One of THQ's top names has stated that the company is planning to launch a feature film alongside the next game, which is scheduled to release before March 2011.

Even though the series has long been known for setting the player free in a world full of destructible environments, THQ is banking on the franchise's outer-space colonization story appealing to moviegoers. THQ core vice president Danny Bilson recently revealed that the company is hoping to start launching movies alongside its triple-A titles, with Red Faction cited as one of the first games to be incorporated into what Bilson calls THQ's "trans-media" strategy.

Promising an announcement on the strategy in the near future, Bilson described the strategy as one that has THQ pitching studios on films for the publisher's triple-A titles while the games are early in development. Earlier in the year, Darksiders creative director Joe Madureira told VG247 that THQ had met with other companies with the intent to turn the then-unreleased action game into a feature film.

Darksiders and Red Faction fans -- would you be interested in seeing THQ's two top original IPs turned into feature films?