Fark.com slams us with its own picks for Most Disturbing YouTube Video 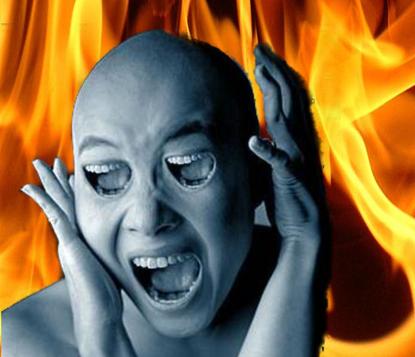 We thought we knew true evil. How wrong we were.

Last month, we presented a list of the most disturbing YouTube videos of all time: a terrifying collection of weird and warped clips from the darkest corners of the globe.

Well they terrified us, anyway. Turns out our readers are made of sterner stuff.

“Phht, you call these disturbing?,” asked one unimpressed sicko via e-mail. “Check out this video of a harlequin baby — now that’s disturbing!” [Link removed to protect your sanity.]

“If these disturb you, you're a pussy,” scoffed real shaman on the news aggregator site Fark.com. “Boring is the most apt description.”

In fact, the denizens of Fark — collectively known as 'Farkers' and 'Farkettes' — were singularly unimpressed with our patch-work horror show, as evidenced on the linked submission's comments page:

“If any of those rank among the most disturbing things you've seen on the internet then you're... Well, you're luckier than me.” — PenguinTheRed.

“The eye one was freaky but really only because I don't like eyes. The rest range from boring to mildly strange to annoying.” — Yeah right I can think of a good log in.

“Somehow, without a couple of girls and a drinking recepticle, this list is incomplete.” — stvdallas.

“What a bunch of sissies. You should all leave the internet now and leave the serious business to the big boys. …2 Girls 1 Cup? I have the directors cut.” — redsquid.

Eventually, a challenge was issued to post ‘better’ videos on the comments page — and boy did the boys ‘n’ gals at Fark.com deliver. We decided to collect some of their nominated videos for your viewing, er, pleasure.

Warning: most of these videos should not be viewed by anyone, for any reason. We really, really mean it.

YouTube Info: Creepy ass animation about two kids who rip open a rabbit to discover a creature who turns bugs into jewels - then greed kicks in.

Suggested by Farkette <b>mrshowrules</b>: “SFW but not for dream time…”

Suggested by Farker <b>Serial</b>: “I am disappointed Pickle Surprise didn't make the cut.”

Suggested by Farker <b>xanadian</b>: “There's a cat version of Ronald McDonald Insanity [See ‘The Most Disturbing YouTube Videos Prt 1]. It, too, is f*cked up.”

YouTube Info: Deep in the forest lived Billy and his charming companions. They peacefully honed their bodies and listened to music there. But a wave of development came upon the forests. One who would turn all to road. Kagamine Rin had come. Billy must stop the construction before all is turned to road.

YouTube Info: Really nasty!! I removed a subcutaneous cyst from the neck of my nephew.

The Botfly in my head

YouTube Info: Witness the horror as I extract a botfly maggot from my head. Beware, this one is gross!

Suggested by Farker <b> Skyrmion</b>: “That horse head gets around.”

YouTube Info: Really weird poodle exercise video for humans. This is a mesmerizing and frightening video. It's a word-for-word parody of Susan Powter's first workout video, featuring poodles and a crazy poodle-woman. Absolutely surreal. It was made by Nagi Noda for Panasonic. It was part of 10 films they made for the 2004 Athens Olympics.

Suggested by Farker <b> lynxi</b>: “Ok, time for a favorite of mine: Poodle Exercise lady.”

YouTube Info: Strange vid from an Acadomy in Israel. Oddly creepy near the end...

YouTube Info: This is the last episode of the infamous "Farfour": Hamas' copycat version of the beloved 1928 Disney creation Mickey Mouse. Farfour has been used to promote a radical Islamic supremacist agenda, and to ferment Jihadist sentiments in Palestinian children.

Farfour first came into international spotlight in May 2007, when Palestinian Media Watch (http://www.pmw.org.il) released a translated video from Al Aqsa TV (a Hamas-owned station) that showed the plagiarised cartoon character. Worldwide condemnation followed over this apparent child indoctrination. Hamas, however, refused to pull Farfour off the air, and immediately broadcasted another episode of Farfour on May 11.

Suggested by Farker <b>titwrench</b>: “This is the most disturbing thing I have seen on you tube.”

YouTube Info: I was staying at Preena's cousins house when I started doing the "hand thing". I could not stop. It got so bad that the next door neighbor,Jerron,started doing it too. Jerron also had a botched plastic surgery job to look more like me. Sick. Poor Jerron he took the tablets and will be gone by midnight.