Is the iPad a Game Changer? 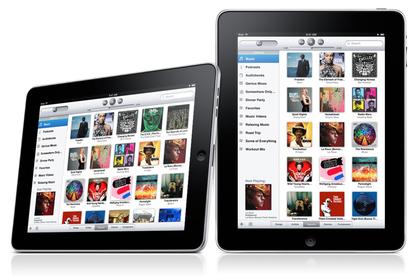 Will the iPad really be a game changer? If history is any indication, it's a good bet the iPad will dramatically impact publishing much like the iPod and iTunes changed the game for music.

At first glance, Apple's long-anticipated iPad seems like only a bigger, more colorful version of the iPhone. Not much to it, until you consider the iPad's improved iBook app reader that displays nicely on the iPad's bigger screen. Then add a fully integrated new iBooks Store that's backed by publishing heavyweights Penguin, HarperCollins, Simon & Shuster, Macmillan and Hachette Book Group.

Clearly, Apple sees the iPad as a game changer in the emerging e-reader market and perhaps even a savior for the embattled publishing industry. "We think iPad is going to be a very popular e-reader not just for bestsellers but for textbooks as well," Apple CEO Steve Jobs told the invited crowd gathered in San Francisco.

More than just an e-reader, the iPad is a well-rounded media device for browsing the Web, emailing, sharing photographs, watching video, listening to music and playing games. Its large touch keyboard is supposedly easy to type on. Apple will also sell a docking station with a keyboard attached to it.

The iPad is positioned as a game changer for publishing, evident by the New York Times playing a prominent role during iPad demonstrations. And the iPad will likely play a supporting role as the New York Times transitions to a paid-content model next year.

For books, the iPad uses the popular open book epub format. CourseSmart, which provides 8,800 e-textbooks for college students via an iPhone app, said it plans to release an iPad app at the end of March that will take advantage of the iPad's larger screen size.

But "game changer" is a pretty lofty title, especially for a product that isn't necessarily groundbreaking.

That is, tablet PCs have been around for a while and, to a lesser degree, so have e-readers. The Amazon Kindle and Sony Reader were the first to make a splash, followed by a plethora of e-readers at this year's CES show in Las Vegas.

"We don't see the iPad as a big game changer, and certainly not on the enterprise front," says Rebecca Wettemann, analyst at Nucleus Research. "What we've got is a color Kindle-a Kindle for dummies-at a higher price point."

Moreover, given what happened to the music industry, Wetterman says, publishers should be a little wary of Apple. What about big-name publishers backing the iPad? "They're a little desperate," she says.

Nevertheless, given Apple's string of successes against conventional wisdom, backed by blowout quarters amidst deafening economic times, it's simply impossible to bet against Apple right now. Apple has great vision.

Still not convinced? Here's five things Apple has taught us this past year and how the iPad might play into them:

1. The iPhone: A Real Game Changer

Oracle's Larry Ellison pooh-poohed tech innovation in the Silicon Valley a few years ago. Well, Mr. Ellison, it's alive and well, thank you very much. Moreover, the tech world doesn't turn on an acquisition or two or a dozen. A single company like Apple can still innovate from within and move markets.

The iPad take: The iPod app and iTunes Store changed music for college-aged kids. With the iBook app and iBook Store, the iPad follows the same model. Now college-aged kids will be able to get their music and text books on the same device.

The jury is in: Touchscreens work.

Only a few years ago, touchscreens were more of a novelty than anything else-but the iPhone changed all that. "Prior to the iPhone, the worldwide market for Pro Cap (iPhone's touchscreen technology) was about $20 million," says Geoff Walker, product marketing manager at NextWindow, which makes touchscreens. "This year it'll be somewhere around a half a billion."

The iPad take: The biggest drawback to touchscreens is that it's difficult for some people to type on a touch keyboard. Not so for Jobs, who says, "the iPad is a dream to type on." With the iPad, though, Apple has covered its bases by delivering an iPad docking station that has a hardware keyboard.

3. Individual: The Power of the Consumer

Note to IT staff: You lose again. Apple has shown that consumers count more than you do. And they'll continue to bring in Apple products, tap into your network, then call for support when they need it-and you'll do it. Also, don't expect a whole lot of enterprise support from Apple now or in the future.

The iPad take: How often do knowledge workers need to read documents, articles, manuals? Perhaps they need to watch instructional videos. Or maybe they've jotted down notes at home when inspiration hit them, and they need to bring those notes to work. The iPad will slowly make its way through the back door of corporations.

4. App Store: Imitation is the Sincerest Form of Flattery

Not only have a crop of iPhone contenders hit the market recently, the bigger surprise is the number of App Store imitations. Apple has changed the way people view and buy software. It single-handedly made a billions-of-dollars market for mobile apps. Gartner says consumers will spend $6.7 billion in mobile app stores this year, up from 4.2 billion last year. Better yet, this trend will continue to almost $30 billion in 2013.

The iPad take: It's true, the tables are turned for the iPad. During the iPad's coming out party, Apple flashed a picture of the Amazon Kindle, and Jobs said, "Amazon did a great job with their reader and we're standing on their shoulders here." But the e-reader market is still very new, with many e-readers announced only a couple of weeks ago at CES. "Apple isn't late to the party," says Manish Rathi, co-founder of Retrevo, a consumer electronics shopping site.

Quarter after quarter, Apple has proven that consumers will spend top dollar for tricked-out tech candy despite being in the worst economic slump in recent history with one out of 10 Americans out of work. Earlier this week, Apple posted its all-time highest revenue and profits, $15.68 billion and $3.38 billion respectively. During the quarter, Apple sold 8.7 million iPhones and 3.36 million Macs.

The iPad take: Rathi says his surveys show that Apple needs to get to the $600 price point to maximize unit sales and convert PC consumers to an Apple product. To the surprise of many, the iPad came in $100 less than that.

Will the iPad be another game changer for publishing and reading? Maybe, maybe not. But history shows Steve Jobs is on his "A" game, and Apple is on a roll. A hot player with the hottest hand of all. In Texas Hold 'Em speak, we call that pocket aces.