Just Cause 2 to have YouTube clip upload feature (PS3 only) 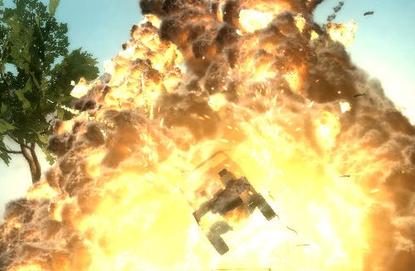 One of the greatest draws of titles like Grand Theft Auto is the ability to create random scenes of massive destruction and carnage. Surprisingly, few titles have capitalized on that and included instant replay features--Rockstar did implement replay for San Andreas on Xbox, but the less said about that half-hearted attempt, the better. Now that sandbox games are getting even crazier and more beautiful, the lack of instant replay is becoming more and more egregious. Thankfully, one of this generation's most insane open-world games is receiving a replay feature befitting its status, as Square Enix has announced that the PlayStation 3 version of Just Cause 2 will include a feature that allows players to upload gameplay clips directly to YouTube.

According to Square Enix, there will be two methods of capturing Just Cause 2 footage for YouTube usage. For moments where an insane stunt comes out of nowhere, players will be able to select an option that writes the last 30 seconds of in-game footage to the PS3's hard drive. If you've got a planned stunt you want to save for posterity, there will also be a 10-minute capture feature, which Square Enix states can be used for more long-form video ideas, like walkthroughs and speedruns.

Square Enix has stated that the video capture feature will be exclusive to the PS3, likely due to the fact that the console requires a hard drive.