Via bumps up the speed of netbook processors

Via releases its fastest netbook processor to date 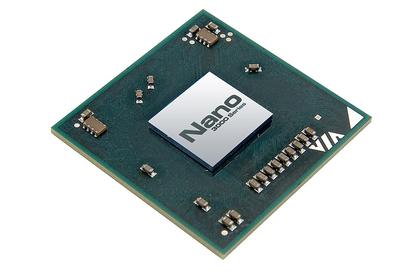 A new Nano 3000 series processor from Via. The chips, Via's fastest netbook processors to date, are 20 percent faster than their predecessors, and use up to 20 percent less power, the company said. The chips run at speeds between 1.0GHz and 2.0GHz, and support Windows 7 and Linux operating systems.

Via launched its fastest netbook processors to date as part of a new lineup of chips that also draw less power, the company said on Tuesday.

The company's new Nano 3000 series processors are 20 percent faster than their predecessors, and use up to 20 percent less power, the company said. The chips run at speeds between 1.0GHz and 2.0GHz, and support the Windows 7 and Linux operating systems.

The new processors should bring better application and multimedia performance to netbooks and thin and light laptops, the company said. The Nano L3100 chip, which runs at 2.0GHz, is faster than the Nano L2100 processor, which ran at 1.8GHz.

Nano chips compete with Intel's Atom processors, which go into most netbooks. Nano chips are being used in Samsung's netbooks, which are designed to run basic applications like Web surfing and word processing. The netbook received positive reviews, with the Nano chip receiving praise for matching up with or providing better performance than Atom chips.

The use of Nano processors has also extended to servers, with Dell putting the chips in the XS11-VX8 servers, which are designed to run light server workloads like Web hosting applications.

Via over the past few years has had some meaningful design wins, with companies like Hewlett-Packard and Lenovo using Via chips in their products, said Dean McCarron, principal analyst at Mercury Research. While those netbooks didn't go into volume production, the new chips should help expand Via's profile in the market as a larger number of consumers buy netbooks.

Despite a drop in market share, Via's overall business has improved because it is shipping a larger volume of netbook chips, McCarron said.

Via said it is shipping samples of the chips to PC makers and motherboard vendors. The chips will go into mass production in the first quarter of next year. The company did not respond to questions about pricing of the chips.