Its long-distance technology could multiply the speed of undersea cables 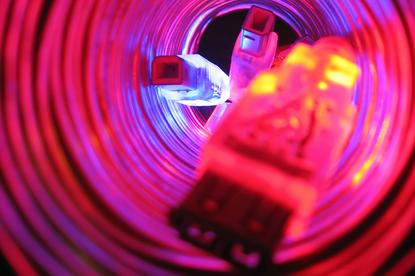 Alcatel-Lucent researchers said they have figured out how to multiply the speed of the fastest undersea cables by a factor of 10, an achievement that someday could send the contents of 400 DVDs hurtling from Paris to Chicago in one second.

Alcatel said researchers at a Bell Labs facility in Villarceaux, France, became the first to achieve the speed of "100 petabits per second.kilometer."

The measurement takes into account both speed and the ability to maintain it over distance, by multiplying the network's speed by its distance in kilometers.

In this case, a network with an aggregate speed of 15.5T bits per second (Tbps) was able to maintain that speed over a distance of 7,000 kilometers (4,349 miles), or roughly the distance from Paris to Chicago. One petabit is equal to about 1 million gigabits.

Because signals can degrade, the highest network speeds are possible over the shortest distances. But part of the requirements of a carrier network technology is reach.

The longest lines in service-provider networks often need to move the most data, because they gather up traffic from entire countries and regions for transport around the world.

The Bell Labs team achieved its speed using 155 lasers, each transmitting data at 100Gbps over a different wavelength.

They also used DSPs (digital signal processors) with a new technology called coherent detection, which allows the DSPs to look at more properties of light than the current method, called direct detection, Alcatel said in a press release.

With coherent detection, the team was able to use more light sources on a fiber and still separate out the various wavelengths at the other end.

Alcatel didn't achieve this speed by using more repeaters along the way to amplify the signals.

On the network, repeaters for sustaining signal strength were spread 90 kilometers apart, 20 percent farther than in typical optical networks, even though lightwave "noise" tends to increase with speed, Alcatel said.

The need for speed on international connections such as trans-oceanic cables has continued to grow even in a weak global economy.

That was faster than the growth rate during the prior 12 months.