One year on, Android's not quite there yet

Google's phone software hasn't yet lived up to lofty expectations, but it could take off in just a few more months 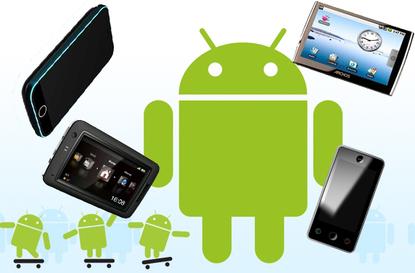 2009: The Year of the Android Invasion? Not quite.

After it has spent nearly a year on the market, analysts are reluctant to declare Android a success, but they say the platform could turn a corner in the next few months when many more phones are expected to go on sale.

Google and T-Mobile unveiled the first Android phone, the G1, at an event in New York City on Sept. 23 last year. The device hit stores a month later.

One million G1s were sold in the first six months, and almost the same number may have been sold in the period since, said Carl Howe, an analyst with the Yankee Group.

In August this year, T-Mobile introduced the second Android phone, the MyTouch, which like the first was made by Taiwan's HTC.

There are now more than 10,000 applications in the Android Market.

But Android hasn't yet lived up to the expectations set by Google, and some analysts say it doesn't yet present serious competition to Apple's market-leading iPhone.

Six million iPhones sold in its first year, and it then took off even more quickly, achieving a current installed base of 26 million since the device launched in June 2007, according to Howe. There are more than 50,000 applications in the iPhone App Store.

Still, compared to other, less iconic mobile-platform launches, Android has held its own, he said. "It's not the iPhone, but it's not bad for an open platform," Howe said.

When Google first unveiled the Android project in late 2007, it positioned the software as a way to foster innovation in mobile phones by allowing developers to collaborate on new products and services.

Google had complained about difficulties delivering products in the mobile market, where developers must often rewrite their applications for each phone operating system.

The search giant received some criticism for trying to solve the fragmentation problem by adding yet another phone platform. But Google predicted that Android would accelerate the pace at which new and compelling mobile services became available to consumers.

Chairman and CEO Eric Schmidt said at the introduction of Android that he envisioned the software running thousands of phone models.

With those lofty goals, Android seems off to a slow start. Michael Gartenberg, an analyst at Interpret, called the initial G1 "incomplete" for failing to support some basic functions such as Microsoft Exchange synch.

"Android has done a credible showing but they're going to have to do an awful lot more," he said. "They've proved it as a concept. The question is, how much is Google really behind this project in the long term?"

He wondered about Google's commitment because of its relative silence about the platform recently. "We haven't heard all that much directly from Google," he said.

It would be valuable to see a road map for what features Android will deliver in the future, he said.

Google has posted an Android road map online, but the page has only brief information and is updated rarely.

For its part, Google talks as though it is as committed to the phone as ever. "Android has surpassed my expectations," Erick Tseng, lead product manager for Android, said via e-mail. He said he's looking forward to the next year with the launch of new phones and some "truly mind-blowing applications."

Both T-Mobile and Google said they're happy with Android's progress so far. T-Mobile called the G1 "a resounding success."

Android has largely followed in the iPhone's footsteps, rather than setting new trends, but it has contributed at least one significant innovation.

"It's one of the few truly open platforms for developers," said Howe. "If you're someone who wants to reinvent the actual phone-calling experience, in some ways it's the only game in town."

Android may have attracted developers for precisely that reason, but developers have also expressed widespread discontent. Some have complained that aspects of the Android Market discourage application sales.

In addition, the openness of the platform could turn out to be a weakness. "The question is, if it offers this much freedom, how do you prevent it from becoming fragmented?" Gartenberg said. For example, if different vendors alter Android for their own phones, applications may not run across all the different devices.

Google will have to do more than simply deliver an open platform, he said. "At the end of the day, it's going to be what Google can do to drive innovation beyond being open," he said.

The real test for Android will arrive in the coming months. "If it weren't exactly one year, but one year and three months, the question [of whether Android has lived up to expectations] would be easier to answer," Howe said.

That's because he expects at least six, and possibly a dozen, new Android phones to hit the market by the end of the year. Samsung, HTC and LG all could have introduced new phones by then.

Motorola's Cliq should also arrive by year's end. That could provide the first example of Android's true potential, because Motorola has customized the software with a new user interface that highlights social networking.

"All of a sudden it looks like a different phone" compared to the existing Android devices, Howe said.

With more phones and more operators, millions of Android devices are likely to be in the market in 2010, a big enough base to attract even more developers, and thus more and better applications, Howe said.

While Android's influence in the mobile market remains to be determined, the platform has made one thing clear: "If nothing else, it's validating the idea that touch-based smartphones are going to be a new category," Howe said.