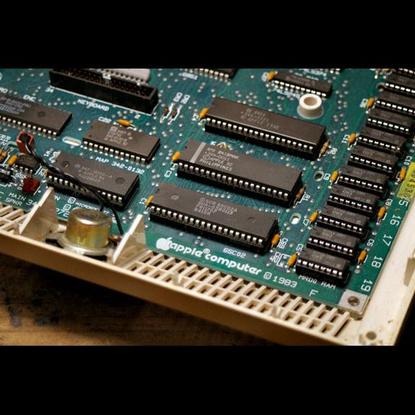 Scientists at MIT have have used a combination of silicon and gallium nitride, a hard material frequently used in LEDs, to create a hybrid microchip that they say is smaller, faster and more efficient than today's processors.

Researchers around the world have been working for decades to create such a hybrid microchip that could help chipmakers keep Moore's Law alive .

The more than 40-year-old prediction by Gordon Moore holds that the number of transistors on a chip doubles about every two years. The predicted upgrades have continued since then, though some observers have long predicted that leakage and energy consumption could keep Moore's Law from continuing at some point.

However, if scientists can find new ways to increase efficiency while continuing to make the chips smaller and faster, then the law stands a much better chance of holding true for years ahead.

"We won't be able to continue improving silicon by scaling it down for long, so it's crucial to find other approaches," said Tomas Palacios, an assistant professor at MIT, in a statement late last week. He added that besides microprocessor chips, the new integrated technology also could lead to more efficient cell phone designs, for instance, by combining the functionality of several different chips onto one.

Jim McGregor, an analyst at In-Stat, said the new hybrid chip is important because it shows that the industry is moving beyond a singular silicon focus.

"We're really in a situation where we're now playing with the entire periodic table and experimenting with different combinations of materials," McGregor said. "The silicon is the basic building block that we put everything on. We've been messing around with the silicon and now we're adding something to it ... so we can change the properties and do things with the chip that we couldn't do before."

"Chipmaking is becoming the ultimate chemistry and physics experiment," McGregor added. "We're using more and more parts of the periodic table and we're down to nanometers and looking at how many electrons can flow from transistor to transistor. It's important for the entire industry, which is focused on this type of research."

MIT noted that Palacios, along with student researcher Will Chung, didn't add the gallium nitride as a layer on top of the silicon. Instead, they embedded it into the silicon substrate, which is an underlying layer. Because the semiconductor industry already uses the same type of silicon substrate, MIT contends that the hybrid chip could be made using today's manufacturing processes, which would be less costly than using different substrates.

"We are already discussing with several companies how to commercialize this technology and fabricate more complex circuits," said Palacios, adding that it could take several years before the technology is ready to be commercialized.

The move was the latest in a series of recent chipmaking announcements by MIT.

Last week, the university announced that researchers there have found a new way to grow carbon nanotubes that could be used by manufacturers to build smaller, faster computer chips. The nanotubes should someday be used to replace the copper wires that connect the transistors and also may even replace the transistors themselves even further down the road.

Last year, MIT announced that a research team at the school had created a new chip design that could be 10 times more energy efficient than processors now used in mobile devices. The design is intended for use in portable electronics, like cell phones, PDAs and even implantable medical devices.