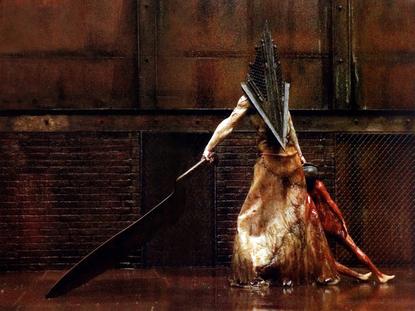 The iconic 'Pyramid Head' is sure to return to the touted sequel.

Contrary to a lot of opinions, I thought the Silent Hill movie was great and very well done. As a huge fan of the series, it's difficult to not notice the amount of detail that went into making the movie as true to the games as possible. The ash covered town, the fact that fog seems to always be closing in on the character, the roads that are broken and end leading into an abyss, and hell even Pyramid Head and the nurses were straight from the games. I don't see how any fan going into the theater with an open mind could not like this movie.

Whether you are a fan of the movie or not, the original writer, Roger Avary, and original producer, Samuel Hadida, have signed on to do a sequel. The things that might set the sequel up for immediate failure is the fact that the original director, Christophe Gans, may not be returning for the second film. What makes this fact rather disturbing is Gans was the true fan of the game series on set. Without him, the film may lose its detailed references to the games. Another red flag is producer Hadida is known for his work on the Resident Evil films and well, enough said.

I would love to see a sequel to the Silent Hill movie, but I do not believe these are the right guys to do it. Even though there has been no announcement on the storyline of the sequel, in true Silent Hill fashion, the new movie should follow a completely different story of someone's fate who ultimately brings them to the creepy town -- not a continuation of where the last film left off. I guess only time will tell on whether Silent Hill 2 can break the trend of shitty game-to-movie adaptations and actually become something gamers are proud of. We will see.