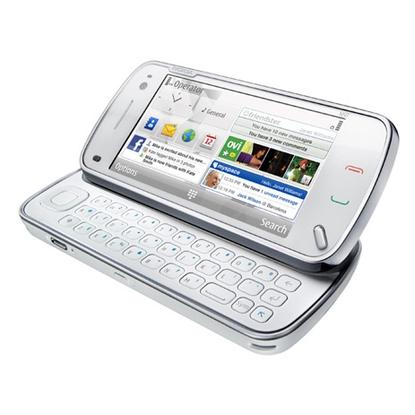 Nokia this week released its high-end N97 3G smartphone, combining a touchscreen with a tilted 3.5-inch display, a full QWERTY keyboard, and inviting a straight-up comparison with Apple's trend-setting iPhone.

The handheld combines advanced hardware features with a bundle of services, including assisted GPS, which are intended to merge the device tightly with location-based applications, social networks and the mobile Web. The company also unveiled an improved Nokia Maps service and a new Nokia Messaging service, both part of its Ovi online services set.

Some of the drawbacks: early consensus is that the N97's touch interface is not quite up to fluidity of the iPhone standard; it's pricey (nearly US$700 without a carrier subsidy); and won't be available in the United States until sometime after mid-2009.

Besides the iPhone, rivals include Research in Motion's just-introduced BlackBerry Storm, and two Windows Mobile smartphones, the Sony Ericsson X1 and the HTC Touch Pro.

N97 users can create a customized home screen with the widgets of their preferred Web services and social-networking sites. The Nokia Web browser, unlike Apple's Safari browser on the iPhone, supports Flash and Flash video. The combination of the touchscreen and a full slide-away QWERTY keyboard (the iPhone uses a virtual keyboard) is intended to unite an intuitive touch interface with the thumb-driven keyboard for heavy duty texting and e-mail.

Promoted as a "mobile computer," the N97 supports up to 48GB of storage, including 32GB of onboard memory, expandable with a 16GB microSD card for music and other media. It runs on the latest version of Nokia's S60 Symbian operating system.

It supports a range of WCDMA and EGSM cellular frequencies and HSDPA for 3G wireless. It has a 802.11bg adapter and Bluetooth 2.0 and enhanced data rates. It supports a Micro-USB connector and Hi-Speed USB 2.0. In addition, there is a built-in GPS receiver with support for assisted GPS services.

Nokia is opening widget development to third-party programmers. For now, users will have to make use of the existing Symbian application, called Downloads. Nokia hinted it will release an improved download service, akin to Apple's popular App Store in 2009.

The new version of Nokia Maps, for mobile mapping and navigation, lets users pre-plan a route on their PC, then synchronize it with their mobile device. The service also supports high-resolution aerial images, 3D landmarks for 216 cities, and terrain maps. There's also a new route overview feature. The company says future upgrades will integrate Nokia Maps with other personal content, enabling users to combine location-associated media and content with trips or visits, and share the results with others.

Nokia Messaging brings together consumer push e-mail and instant messaging for Nokia devices, allowing users to access an array of online mail and messaging services, such as Gmail, as well as those offered by ISPs. Part of the release is a new Web portal for Mail on Ovi, which lets PC users create and access Ovi e-mail accounts and other Ovi services with a single sign-on account.

Mail on Ovi also offers users Web access to e-mail and up to 1GB of storage space, and spam filters. The beta version of Mail on Ovi will be available this month, with a launch planned for February. The broader Nokia Messaging service will launch during the first quarter of 2009 overseas, for Nokia S60-based devices. A US rollout date was not named. Support for IM and for Nokia Series 40 devices will arrive in the second half of 2009. The company says it plans to sign deals with mobile operators to set up Nokia Messaging as an operator-supported service, available as part of a subscriber's data plan.