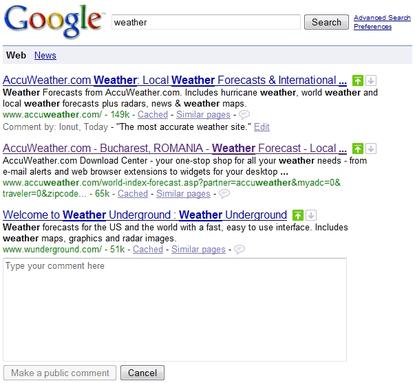 Google unveiled SearchWiki last week, saying that it would allow users signed into Google to change the ranking of personal search results. The tool also lets users delete or add comments to searches.

The comments are shared with other users and signed with a person's username, Google said. Re-ranked search results are only seen by the signed-in user and do not affect other people's results. Google contends that the tool makes searches more useful as users can benefit from community edits of search results.

Some bloggers quickly criticized the tool, while others have posted a script to disable it, thus returning search results to their original format.

TechCrunch blogger Michael Arrington, for example lamented that the new feature allowed pornography spam to show up in the search results for the TechCrunch blog. "Cheers were heard across the Internet earlier [Saturday] when Google's new SearchWiki search interface inexplicably vanished," he blogged. "Perhaps, just maybe, it was gone for good. Or at least when it returned it would have an opt out feature."

The interface soon returned, however, prompting him to criticize the interface for allowing comments like the spam that "scar Google's once pristine search results page."

He linked to a script for users who "were unfortunate to accept it in the first place" to disable Search Wiki.

Google did not immediately respond to a Computerworld request for comment on the criticism of SearchWiki.

Dave Weinberger, a fellow at Harvard's Berkman Center for Internet & Society, said that Google committed two rookie mistakes in the development of SearchWiki. "First, opting us in is obnoxious enough, but not giving us a way to opt out is unsupportable.," he added. "Where's the big 'No thanks' button?" Second, he added, the results page shows users the nicknames of others users who have voted a page up.

"So, now the whole world will see that 'dweinberger' not only searched for ' Angelina Jolie' but thumbs-upped the page of closeups of her tattoos?" he added. "Guess who just changed his nickname to something less identifiable! This is a feature without value? -- the list of names isn't clickable or complete [and it does not] tell you how many people voted it up - unless you recognize someone's nickname, in which case it has negative value."

Michael Zimmer, an assistant professor in the School of Information Studies at the University of Wisconsin-Milwaukee, added that Google has long pointed out that it tracks, collects and processes what users search for and click on to improve the quality of search results.

"With SearchWiki, Google can now amass an even larger data set of user behavior, including how particular users rank certain results, what results they don't find relevant, and even what results should be there that Google's spider hasn't yet discovered," he noted. "In short, users are now performing much of the crawling, indexing, and ranking functions that Google has previously stated was done to near perfection through its algorithms. And what do users get in return for providing this labor to Google? Better results, perhaps. But also some serious privacy concerns."