Nvidia and partners are offering new Personal Supercomputers for under $10,000. 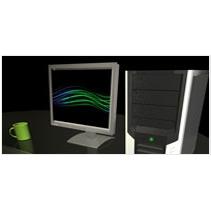 Hardware maker Nvidia has announced a new computer that has the power of a cluster of computers at a small fraction of the cost.

The Tesla C1060 card, available on computers Tuesday, will sell for US$1,699, with desktop computer systems including the card selling for less than US$9,995, said Andrew Humber, an Nvidia spokesman. The systems would run at a processing speed of four teraflops, or four trillion floating point operations per second.

A grid of computers can cost 100 times the cost of one of the Tesla-powered workstations, Nvidia said.

"This represents phenomenal price/performance for computational researchers who have typically had to compete for time on expensive and power-hungry clusters," he said in an e-mail.

"GPU based systems enable us to run life science codes in minutes rather than the hours it took earlier," Jack Collins, manager of scientific computing and program development at SAIC-Frederick's Advanced Biomedical Computing Center in Frederick, Maryland, said in a statement. "This exceptional speed-up has the ability to accelerate the discovery of potentially life-saving anti-cancer drugs."

While there have been claims of desktop supercomputers in the past, "this time it's for real," Burton Smith, a technical fellow at Microsoft, added in a statement.