Problems with e-voting reported early in US battleground states 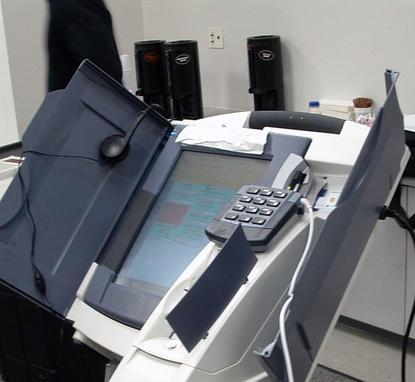 Today could be a long day for election officials in states relying on electronic-voting machines to record votes in the US presidential election, if early reports of malfunctions are any indication.

Problems with e-voting machines were reported early on election day in several US states, including Florida, Ohio, Pennsylvania and Virginia, which are identified as battleground states where the outcome of the vote could tip the presidential race in favor of either Democratic Senator Barack Obama or Republican Senator John McCain.

According to voter reports on the ground and from watchdog organizations, there were problems with getting e-voting machines up and running in these key states and others, and in some cases the machines would crash during the voting process and had to be rebooted.

Pennsylvania and Virginia were among states Verified Voting, an advocacy group focused on improving voting systems, and other watchdog organizations said they would keep a close eye on for voting problems. Neither state had early voting before November 4, nor do they require paper-trail backups with the touchscreen electronic-voting machines in place at polls.

Critics of e-voting say that without a paper trail, there's no way to audit the results of a touchscreen machine, often called DREs, or direct recording electronic machines.

Some polling locations can give voters so-called "emergency" paper ballots, but this is not the case in all locations, said Pamela Smith, executive director of Verified Voting, in an interview early Tuesday. "There is no clear policy on emergency paper ballots, or on when to distribute them so voters can still vote," she said.

Moreover, if there is widespread failure with machines, locations with paper ballots are "concerned they'll run out," Smith said.

This, in fact, happened at one location in northern New Jersey Tuesday morning, where emergency paper ballots were gone by as early as 9:30 a.m. local time. Polling officials began making photocopies of paper ballots because people who came to vote were leaving the site, frustrated by the delay.

One poll worker at the site who asked not to be named said, "I don't have much faith in these machines," and voters interviewed on-site were concerned their votes would not be recorded properly because they were on paper.

William Grafton, an IT professional, left the line at a polling site in Maplewood, New Jersey, a town just outside of New York, because an e-voting machine was not working; he said he would return at lunch to try again.

Grafton said people in the area are "worried" their votes will not be counted because they would be on paper ballots and not on the e-voting machine.

Other voters said they preferred to use a paper ballot even if they voted via e-voting machine because they felt having a paper trail to record votes was more secure.

"It's two minutes to do the electronic, so if you have to do the paper I would do it too, to make sure the vote counts." said Sylvia Green-Robinson, a certified nurse's aid who waited two hours to vote at a polling site in Irvington, New Jersey, about six miles from New York.

Interviewed outside of that polling site, Irvington Councilman David Lyons also said that he's heard concerns from voters about the security of votes without a paper trail, including worries that "people might be able to hack" into voting machines and there will be no record of actual votes.

Unlike older machines that have been used to vote in the state, with New Jersey's new e-voting machines, "if there's a problem there's no paper trail to actually show how people may have voted," he said. "Elections in this country should be fair and clean. There shouldn't be any fear of people worrying about whether their votes were going to be cast, or whether someone can hack in and change things.

Lyons also grumbled about the fact that there was only one e-voting machine in his district, which predominantly consists of African-American voters who were expected to turn out en masse this election because it marks the first time an African-American, Obama, is a major party's candidate for president. He said that election officials should have been more prepared for high voter turnout.

"I mean, this municipality is mostly African-American," he said, complaining that voters were being squeezed into polling places that lacked the resources to handle them. "I didn't know how it is that they didn't prepare for this."

By 10 a.m. local time, the Richmond Times-Dispatch newspaper in Virginia reported on its blog of voting news that it received widespread reports of e-voting problems, including trouble with the wireless communication systems of voting machines in Godwin, which the registrar there was quoted as attributing to human error. While that issue was fixed by about 6:45 a.m., other e-voting miscues were cited by the newspaper, as well as reports of a problem with ballots jamming in the feed of a machine that reads marked ballots.

By mid-morning Eastern Standard Time the State Board of Elections in Virginia reported in a press statement its call centers were "experiencing an unprecedented number of calls" from voters about the election. State officials urged voters to call their local registrars for assistance with voting or use the state's Web site rather than call the election board.

Mike Litterst, a spokesman for the board, confirmed that there were problems reported with optical-scan machines in the state, but called them "isolated" incidents and attributed them to the weather. It was raining through much of the state, he said, which resulted in wet ballots that were jamming the machines.

"People's hands were wet filling out the ballots, and there would be a pucker in the paper when they voted" and it would jam the machine," Litterst said, adding that there were no problems reported so far with touchscreen machines.

Despite these reports, he said that the state had "the utmost confidence" that the vote would be fair in Virginia.

"People's votes will be counted," Litterst said. "The weather is not helping, and certainly there are lines, but that is not unexpected."

Despite Litterst's optimism, one nonpartisan watchdog group, the Election Protection Coalition, was calling for polls in Virginia to stay open two hours later than scheduled because of the problems reported there.

"Virginia is emerging as a major hot spot, with tens of thousands of voters at risk," the coalition said in a press statement, adding that it received hundreds of calls to the Election Protection Hotline reporting, among other things, "massive machine failures across the state."

Other problems reported, according to the group, were late openings at more than two dozen precincts, voters being turned away and voter intimidation.

By late morning voters in Michigan also began reporting that machine malfunctions were contributing to long lines and that some polling sites had to use paper ballots, according to the Our Vote Live blog. The Electronic Frontier Foundation developed Our Vote Live as a way to document voter problems reported to the Election Protection Coalition.

The southern part of Florida also was developing as a hotbed of problems for voters. In the area, which was the epicenter of voting problems in the controversial 2000 presidential race that put President George W. Bush in office, voters reported broken optical scan machines and long lines, according to Our Vote Live.

Voter-registration problems also were being widely reported to election watchdog groups by voters in Virginia, as well as in Florida, Pennsylvania and other key states. Crowds swelled at polling places, and police in many locales were called to help direct traffic around voting sites.

However, official reports were at odds with some of those watchdog reports during the morning.

The Election Protection watchdog site had reports or problems with e-voting machines from "numerous polling locations" in Columbus, Ohio. Asked about those, Jeff Ortega, the spokesman for Ohio Secretary of State Jennifer Brunner, said that office had not received reports of major problems regarding machine problems there.

"The polls opened on time, the average longest wait is about an hour -- in many cases, it's much shorter than that," he said, adding that there were "no major problems to speak of."

However, the Associated Press reported that there were problems when a "handful" of machines malfunctioned in Fairfield County, which is southeast of Columbus, while the wrong paper ballots were sent to two precincts, according to Debbie Henderly, the elections director there.

In Philadelphia, someone who answered the phone in the deputy city commissioner's office said there were "no more problems than usual" with e-voting machines in that area, though it was one in which there were numerous reports of machine malfunctions. A direct call to the office of Deputy City Commissioner Fred Voigt was not returned Tuesday morning.

Illinois was another state where voters were reporting problems with machines, Verified Voting's Smith said. However, Illinois is not considered a battleground state, as it is the home state of Democratic presidential candidate Senator Obama, and he is widely projected by pollsters to win the election there. The race between the two candidates is closer in Ohio, Pennsylvania, Florida and Virginia, according to polls taken before election day.

Marc Ferranti in New Jersey and Nancy Weil in Boston contributed to this report.