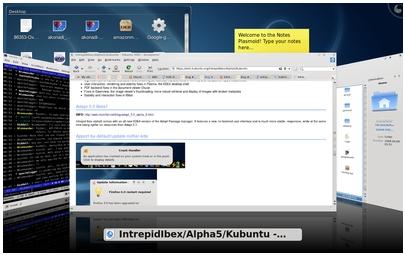 Canonical has updated its flagship Ubuntu Linux operating system to version 8.10 “Intrepid Ibex” with the KDE-centric distribution, Kubuntu, the first to ship with KDE4 as the default desktop.

Ubuntu 8.10 Desktop Edition sports a number of significant feature enhancements, including 3G network support, quick "guest sessions" to enable a computer to shared on the fly, and Ubuntu can now be put on any USB key and installed on another computer rather than using a CD.

The latest Gnome 2.24 desktop environment has been included in 8.10, with new features including a built-in time tracker, improved file management and toolbars, and better support for multiple monitor use.

“Ubuntu 8.10 has many features that sign-post how Linux will provide the drive and innovation in desktop computing," Silber said.

Ubuntu's KDE-centric distribution, Kubuntu Linux, receives the most disruptive change with KDE 4.1.2 being used as the default desktop environment in favour of the more established KDE3.

KDE4 is described by its developers as a radical change to the desktop computing experience, not just KDE, but it has also received criticism for not maintaining the familiar look-and-feel of KDE3.

Kubuntu users wanting to stay with KDE3 are advised not to upgrade to 8.10, but to keep using the supported 8.04 release which includes KDE3.

Kubuntu 8.10 also has a number of enhancements over the standard KDE 4.1.2 release, including customised Plasma widgets, a QuickAccess “plasmoid” in the panel which provides fast access to files in the home directory, taskmanager tooltips, and tools – from package management to printer setup – for integration with the rest of the Ubuntu system.

Ubuntu 8.10 Server Edition will be maintained for 18 months and adds enhancements in virtualisation, Java development and system management.

For virtualisation, 8.10 ships with a virtual machine builder which allows complete VMs to be built from the command line so developers and system administrators can script the creation of custom virtual images.

Also, 8.10 can be run as a guest OS on Xen hypervisors, and KVM has been updated to allow more flexible memory management.

The open source Apache Tomcat 6.0 and OpenJDK are now supported by Ubuntu for Java applications.