What tech-industry CEOs are saying about the economy

Executives from Apple, AT&T, IBM and other tech companies comment on current and future market conditions 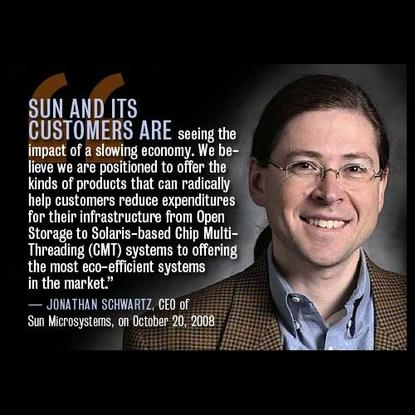 Until September, the US tech industry appeared insulated from the year-long economic slowdown. Most of the 20 largest US tech firms reported solid second-quarter earnings in July and August, and they were projecting continued growth in sales through the year-end. Then Wall Street crashed. Here's the latest word from tech executives about current market conditions and the outlook for the rest of this year.

Microsoft executives said they saw a slowdown in sales in September and October, and CFO Chris Liddell noted on October 23, 2008 that Microsoft would adjust downward its guidance for the second fiscal quarter of 2009. Still, Liddell said "we feel extremely good about our relative competitive position and our ability to continue outgrowing IT spend. We believe our exceptionally strong cash flow, product pipeline and financial strength will allow us to weather economic conditions well."

Wireless subscribers and IP data are driving sales for AT&T, which posted third-quarter revenue of US$31.3 billion, up 4 percent from the same quarter a year ago. Net income was US$3.2 billion, up from US$3.1 billion a year ago.

"While the macro environment presents challenges, our business is more resilient than most," said Rick Lindner, senior executive vice president and CFO of AT&T, on October 22, 2008. "We have great assets. We're growing revenues. We continue to have opportunities to reduce costs. Our management team is experienced and tested, and our execution continues to produce good results. Wireless subscriber growth and data growth are both very strong. . . . Business trends continue to be stable."

Driven by iPhone 3G sales, Apple reported revenue of US$7.9 billion for the quarter that ended September 27, 2008, up 27 percent from the same quarter a year ago. New iPhones, Macbooks and iPods are expected to remain popular.

"We have the strongest product lineup in Apple's history, the most talented employees and the best customers. And $25 billion in the bank," said Steve Jobs, Apple CEO, on October 21, 2008. "We may get buffeted around by the waves a little bit, but we will be fine and stronger than ever when the waters calm in the future."

Sun reported preliminary third-quarter results, indicating a 5 percent to 8 percent decline in revenue from the same quarter a year ago. Sun will release details on October 30.

"Sun and its customers are seeing the impact of a slowing economy. We believe we are positioned to offer the kinds of products that can radically help customers reduce expenditures for their infrastructure from Open Storage to Solaris-based Chip Multi-Threading systems to offering the most eco-efficient systems in the market," said Jonathan Schwartz, CEO of Sun, on October 20, 2008.

Texas Instruments announced third-quarter revenue of US$3.4 billion, down from US$3.7 billion a year ago. TI's income dropped 26 percent to US$563 million during the same period. Revenue was down for all but analog and embedded processors.

"Our outlook for the fourth quarter is for revenue to decline substantially, based on weak order trends over the past few months," said Rich Templeton, Texas Instruments chairman, president and CEO, on October 20, 2008. "We will accelerate our inventory reduction in the fourth quarter. We also will continue to reduce expenses and capital spending. At the same time, we will continue to invest in opportunities to strengthen our positions in Analog and Embedded Processing."

Emerging markets and IT services drove IBM's solid performance in its third quarter, in which revenue was US$25.3 billion, up 5 percent from the same quarter a year ago. The company's net income was US$2.8 billion, up 20 percent.

"[Various] strengths, along with our strategy to manage for productivity in major markets and to invest for growth in emerging countries, have enabled IBM to thrive despite an economic environment that no one could have predicted. We remain confident in our full-year 2008 outlook," said Samuel J. Palmisano, IBM chairman, president and CEO, on October 16, 2008.

Google reported revenue of US$5.5 billion for the quarter that ended September 30, 2008, an increase of 31 percent compared with the same quarter a year ago. Net income was US$1.3 billion, compared with US$1 billion a year ago.

"It's pretty clear that the economy is worse than it was predicted to be just a month ago. What started off as just a financial crisis appears to be affecting the wider economy. The economic situation is so fluid that we are all in uncharted territory. . . . We're going to keep a close eye on costs based on everything we read in the papers, because it's the right thing to do," said Eric Schmidt, CEO of Google, on October 16, 2008.

"As we look to Q4, it is hard to know what impact the financial crisis will have on end-customer demand. We are confident that our product portfolio, strong cash flow, commitment to deploying new technology and market momentum will allow us to outpace peer companies at a time when business levels are difficult to predict," said Paul Otellini, Intel president and CEO, on October 14, 2008.