T-Mobile, HTC and Google introduced the first Android phone on Tuesday at a launch event in New York. 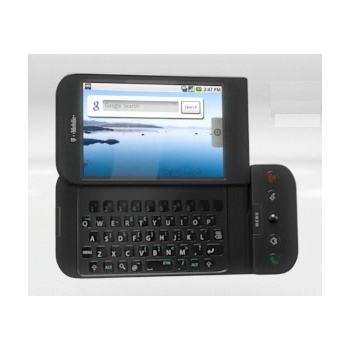 The first Android phone looks a lot like the fuzzy pictures that have surfaced online for months, with a touch screen similar to the iPhone and a full slide-out keyboard.

T-Mobile, Google and HTC unveiled the long-awaited Android phone at an event in New York on Tuesday, revealing pricing, availability and some of the initial applications and emphasizing that the software is open source.

The phone will first become available in the U.S. but a U.K. launch will follow shortly after. Starting Oct. 22, U.S. consumers will be able to buy the G1 for US$179. Users can subscribe to a limited data plan for US$25 a month or US$35 for unlimited data access.

The G1 will go on sale in the U.K. in early November and other T-Mobile European markets in the first quarter next year. No formal plans have been made for Australia.

A demonstration of the phone showed a user flicking the screen to scroll through items, much like the gestures used with the iPhone. The G1, however, also supports the "long press," where a user holds a finger to the screen to open up a menu. For example, holding a finger on a photograph opens a menu offering options such as the ability to send the photo to someone else.

The phone includes a browser built on Webkit, the same technology that drives Apple's Safari browser, said Andy Rubin, senior director of mobile platforms for Google, who is credited with leading the Android development. He called it "Chrome-light," comparing it to the Chrome browser that Google recently introduced.

In a browser window, a user can drag a small box around the Web site and the content behind the box is magnified for easier viewing on the small screen.

The phone, which the executives referred to as "G1 with Google", features many Google applications, including Gmail, Google Maps, YouTube, Flickr and GTalk. It is also integrated with the Amazon MP3 store, allowing users to easily buy digital music, and features the Android store where users can browse and buy new applications.

The phone also includes a dedicated search button. When users press it, a Google search bar pops up on the screen.

G1 users will be able to read Word, PDF and Excel documents but initially at least won't be able to synch Microsoft Exchange mail with the phone. "Currently there's no Exchange compatibility but that's a perfect opportunity for a third-party developer," said Rubin.

T-Mobile is just rolling out its 3G (third-generation) network, with 16 markets live now and 27 markets expected to be live by the middle of November.

When the G1 hits the market, Google will open-source the Android platform. That means that any developer, in addition to being able to write applications for the software, can also modify the platform, "make it better," Rubin said.

The launch event featured a video interview with a few developers, some of whom won a contest Google sponsored for developers of Android applications. They talked up the importance of openness -- perhaps a jab at iPhone. They stressed that developing for Android is free and that any application can be added to the Android application store. By contrast, iPhone developers have to buy the SDK (software development kit), albeit for a low price, and Apple determines which applications will go into the App Store.

Android comes at a time when openness is taking center stage in the mobile market. Symbian, the smartphone platform with the largest market share around the world, recently announced it would open up and the LiMo mobile Linux group is gathering steam. But some experts have wondered if the extent of Android's openness, which allows anyone to change fundamental features, will lead to fragmentation. Without a basic set of features, some applications built for Android won't be able to work properly on all Android devices.