Avast One is a much needed improvement with excellent pricing, and all the features you've come to expect from this premium suite. Both the Individual and Family plans are well worth a look for anyone looking for a solid third-party security suite.

There are two things Avast's paid security suites have been known for besides solid protection: good design and high prices. That's changing a little bit, and for the better, with Avast One, the company's new top-tier product. Avast still offers Premier as a step down, but Avast One is a suite well worth considering if you're interested in solid antivirus plus some extra features and multi-device coverage. It has a new design, three pricing tiers, a lot more features included without extra cost, and the pricing is much better than last we looked.

For this review we're looking at Avast One Individual. 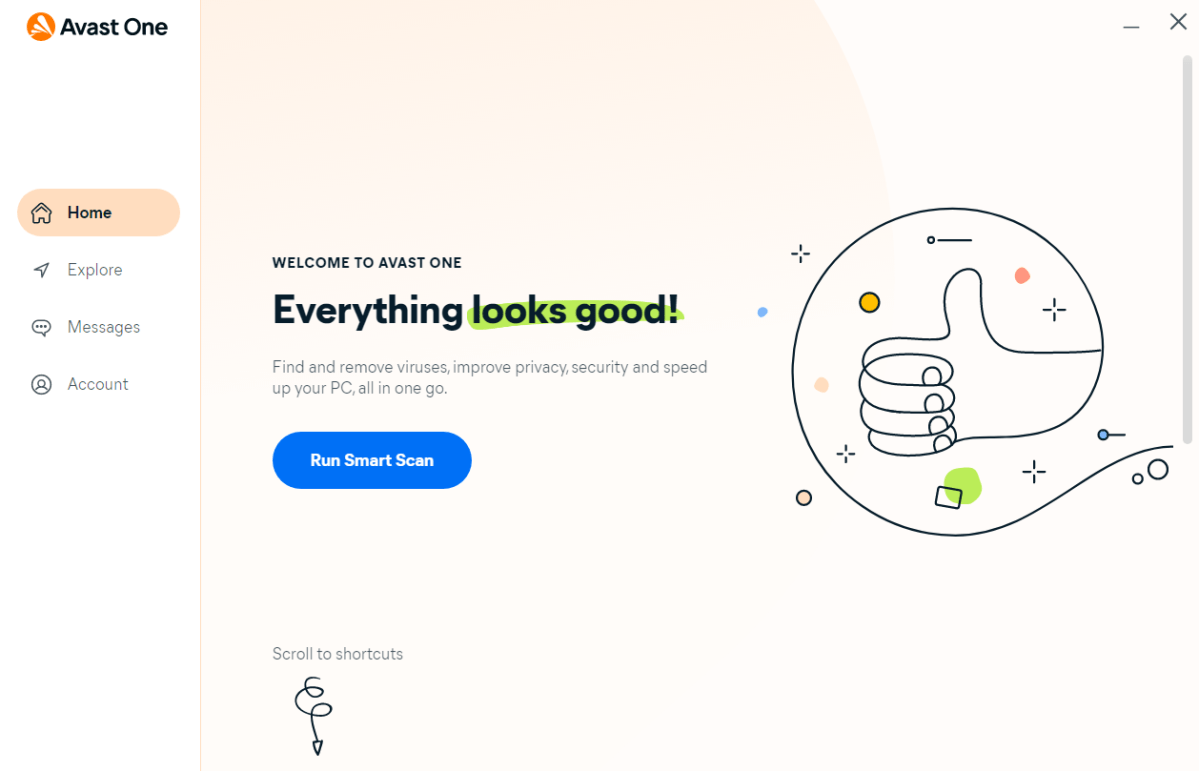 Avast One includes an entirely new desktop app. Gone are the blue and purple tones, and the orange splotch logo. In place of all that, you get a more subdued aesthetic, with a lot of whites and lightly shaded colors, accented by a bolder, and easily spotted blue for the interface buttons.

The left rail has four simple menu items: Home, Explore, Messages, and Account. This makes Avast One look deceivingly simple, but there are a ton of features once you start digging in.

The first time you fire up Avast One it asks to run a smart scan, a not uncommon feature in a number of antivirus suites. Smart Scans combine a security scan with scans for other problems such as browser trackers and an excess of temporary files. The basic idea is to clean up your PC and keep it running smoothly, as opposed to just scanning for malware.

This is a good idea since many top suites come with PC cleaning and maintenance utilities, but often require you to activate them. A smart scan gets you to use at least some of these capabilities, which is important considering some of them used to cost extra and now are just included in the suite. The one issue with Avast's approach is that it does the scan in three stages: browser threats, viruses malware, and PC cleaning. That's fine, but it requires user intervention to initiate each phase instead of just plowing through the entire scan and delivering a report at the end. The constant requirement to continue at the end of each phase gets a little annoying. Not a deal breaker, but this could be handled better.

While the smart scan is the primary scan Avast asks you to do, scroll down Avast One's Home page and you get shortcuts to run a deep scan, a targeted scan on a specific folder or set of folders, initiate a VPN scan, or use the PC optimization tools.

Moving on to Explore you get into the meat of Avast One's features. Explore is really more of a launchpad for all the deeper controls of the security suite. For example, under Explore you have Scan Center, which has its own screen and includes the controls for all the types of scans you want. This includes the types of scans we've already talked about, as well as a boot-time scan. You can also save scans in the Custom Scans section if there's a type of scan you want to run repeatedly. This is also the section where you can schedule scans, such as running a deep scan once a month, and peform a quick scan every day. 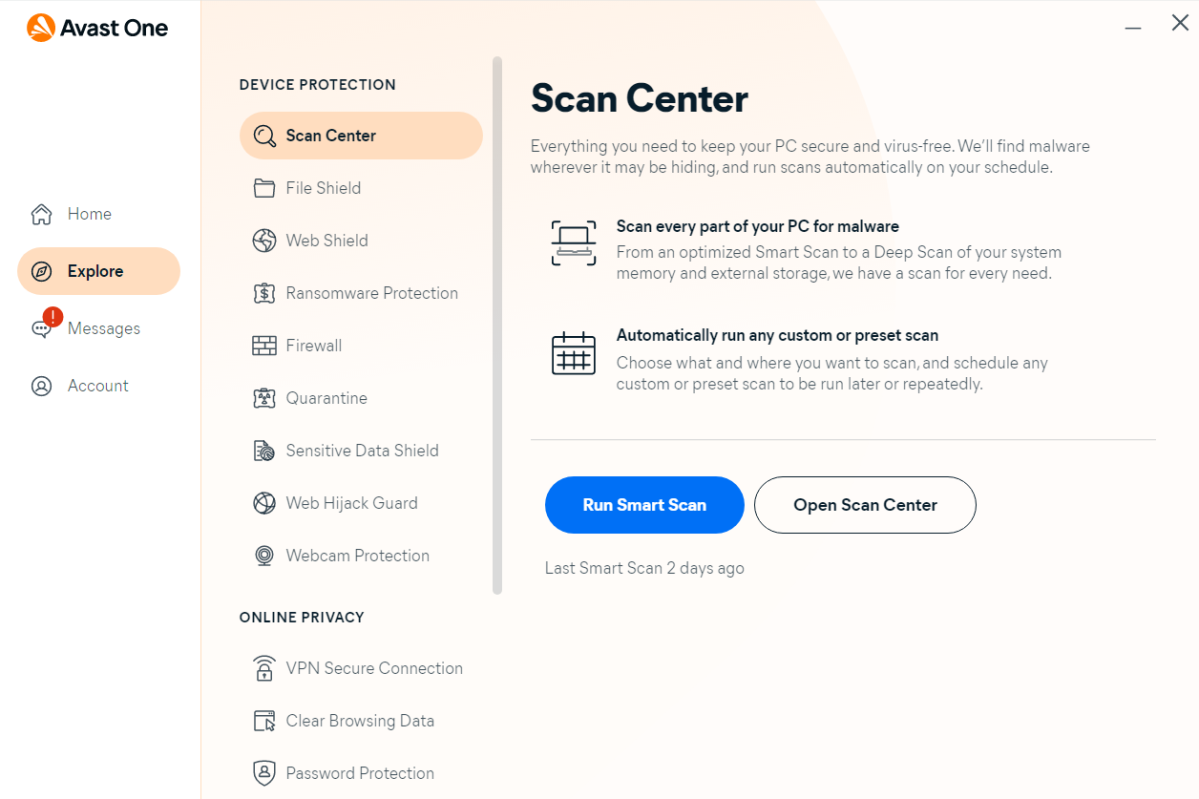 Other key security features inside Explore include file shield for monitoring changes to files for malicious behavior, ransomware protection, web shield for staying safe online, a firewall allowing you to block internet access on a per-app basis, webcam protection, and a number of other features.

The firewall is particularly nice since it offers customizable security in a very simple interface. It's not the most advanced firewall you can find, but it's a firewall that even non-techies can use if they feel the need. For paid users, the firewall hides key identifiers of your PC from other devices on the same network such as the PC's name and the type of device. If another device starts doing a port scan on your PC, the firewall will notify you, and it's built to deter man-in-the-middle attacks. 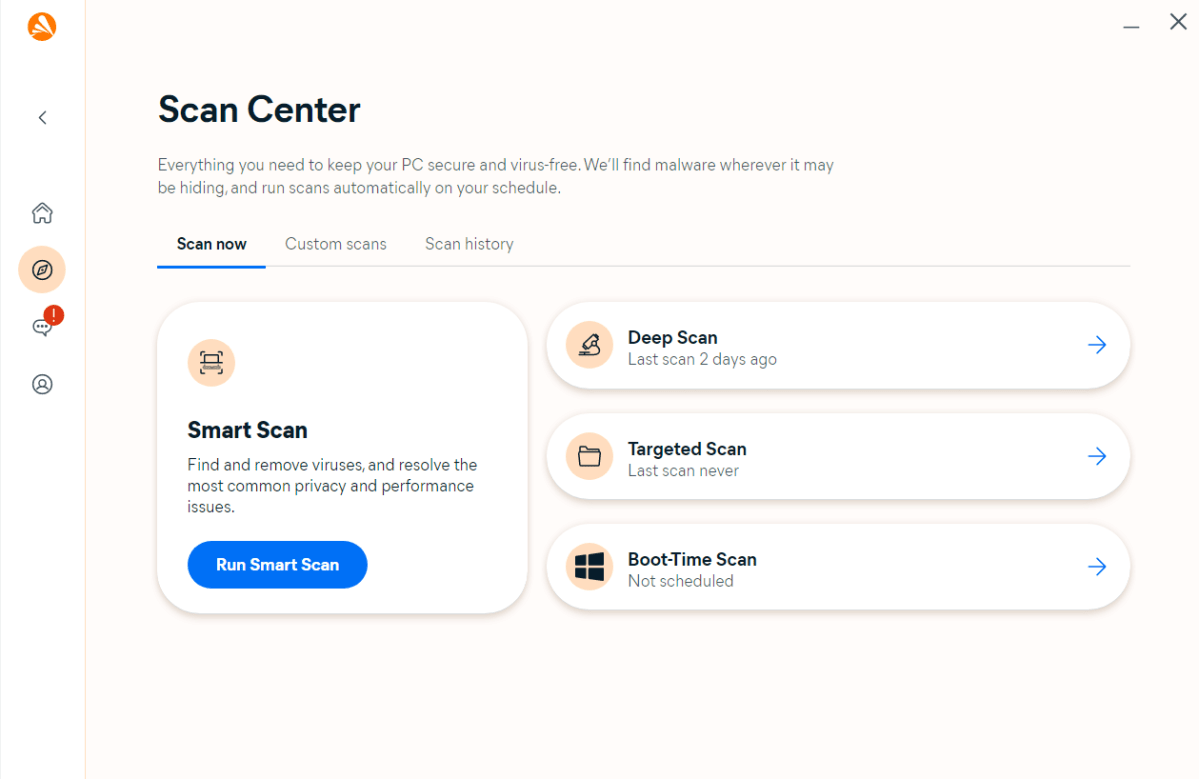 Avast's built-in VPN allows unlimited bandwidth as part of the paid packages, with a wide range of country locations to choose from. Free users also aren't left out, with a solid 5GB per week. This is quite a switch from the prior suites that wanted more money to use the VPN. The paid version supports peer-to-peer transfers, as well as streaming servers for viewing geo-restricted content. Avast can also automatically turn on the VPN when you do things like go to banking or shopping websites. Those are nice additions, though be aware that you really shouldn't be going onto a banking website over Wi-Fi on a network you don't trust.

The paid version also has what is commonly called dark web monitoring but what Avast calls Password Protection. This feature alerts you if any of your passwords for online services ever get revealed in a data breach.

The other two parts of Avast One are for managing your account and receiving notifications from the company. That's it. The interface is far more simplified than it once was, and it already wasn't very complicated. This is an excellent design and is easily navigable by anyone from a grizzled PC veteran to a novice user. 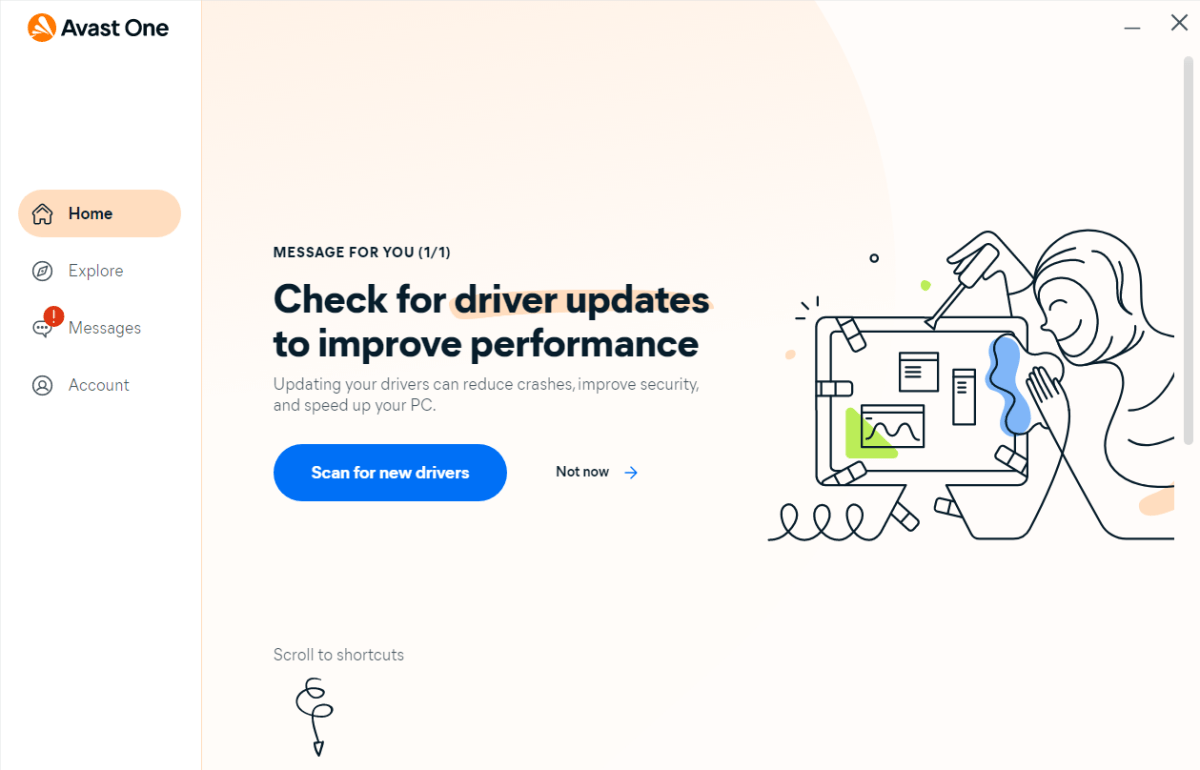 Avast One's messaging alerts you to actions that should be carried out.

Testing house AV-Test gave Avast Free, which uses the same detection engines as Avast One, a 100 percent score for protection against 0-day malware and widespread and prevalent malware. The testing occurred in July and August 2021.

For our in-house hardware performance tests, we found that Avast had no real performance impact on our large file transfer test, archiving test, and the Handbrake encoding test. The only noticeable change is that unzip times were actually a little bit faster at just under 7 minutes with Avast installed compared with around 8 minutes without.

For the PC Mark Extended test, the PC performed slightly better, with an average score of 1630.67 after three consecutive runs compared with an average of 1643 without Avast installed. The main performance impact was found in the productivity tests that deal with spreadsheets and text documents. That's perhaps not surprising given that Avast One is monitoring files for malicious changes. The difference isn't too huge overall, however; and unless you're opening a ton of large datasets in Excel you shouldn't see much of a performance impact. Gaming performance was unaffected by Avast One. 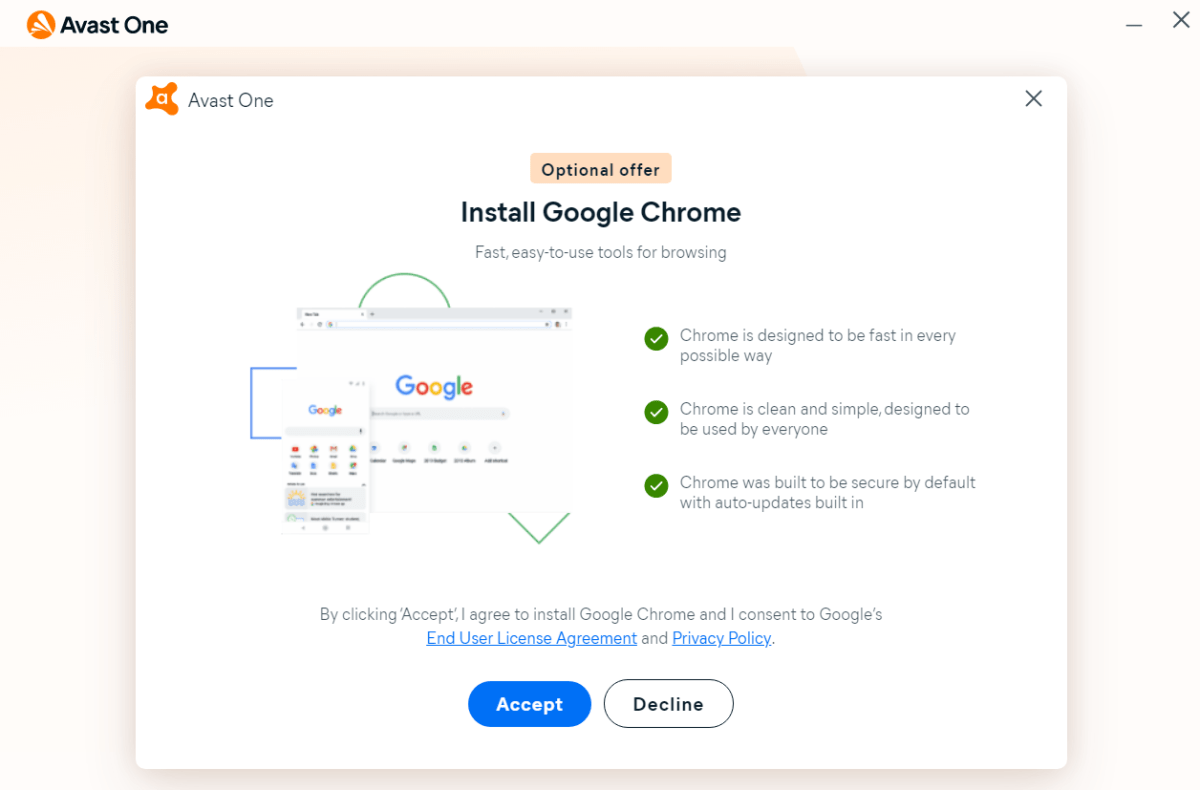 Avast One Individual costs US$48 for the first year for new customers, with a regular price of US$100 per year. For that price you get one Avast account that covers five devices. That's quite a switch from Avast's old Premier pricing that would cover a single PC for US$70.

Avast One Family provides six accounts and coverage for up to 30 devices and is priced at $72 for the first year for new customers, and a regular price of US$140 per year.

If a paid suite isn't your bag then there's also Avast One Essential, which includes a lot of features for free, including that 5GB of VPN usage every week. But you miss out on items like the sensitive data shield, webcam protection, and optimization features such as the disk cleaner and driver updater.

Avast One is available for Windows, macOS, Android, and iOS.

Avast One is a very good suite. The price is right, the protection is excellent, and the performance impacts are negligible for most users. Avast is also a good value with the One lineup, which is not something I would've said about Avast Premier a few years ago. If you're looking for a new security suite, or want to upgrade your current Avast lifestyle, I'd highly recommend looking at Avast One.