Nvidia's monstrous GeForce RTX 3080 graphics card launched over a year ago, but it's still damned near impossible to get your hands on one if you don't feel like paying a just-as-monstrous markup on Ebay. But soon, you'll be able to tap the GPU's fearsome firepower for roughly the cost of a Netflix subscription, as Nvidia is bringing the GeForce RTX 3080 to its GeForce Now cloud streaming service, along with a juicy 1440p, 120Hz gaming option.

It's a huge level-up for GeForce Now, cementing it as one of the best options for PC gaming during the never-ending GPU shortage. If you're looking to get into desktop gaming for the first time, or if your current graphics card dies and you don't want to spend $1,500 to $2,000 on an RTX 3080 of your own on the street, GeForce Now can keep you playing at a high level until the madness ends (at least assuming your internet is up to snuff). And yes, that includes cutting-edge, real-time ray tracing and Nvidia DLSS capabilities. 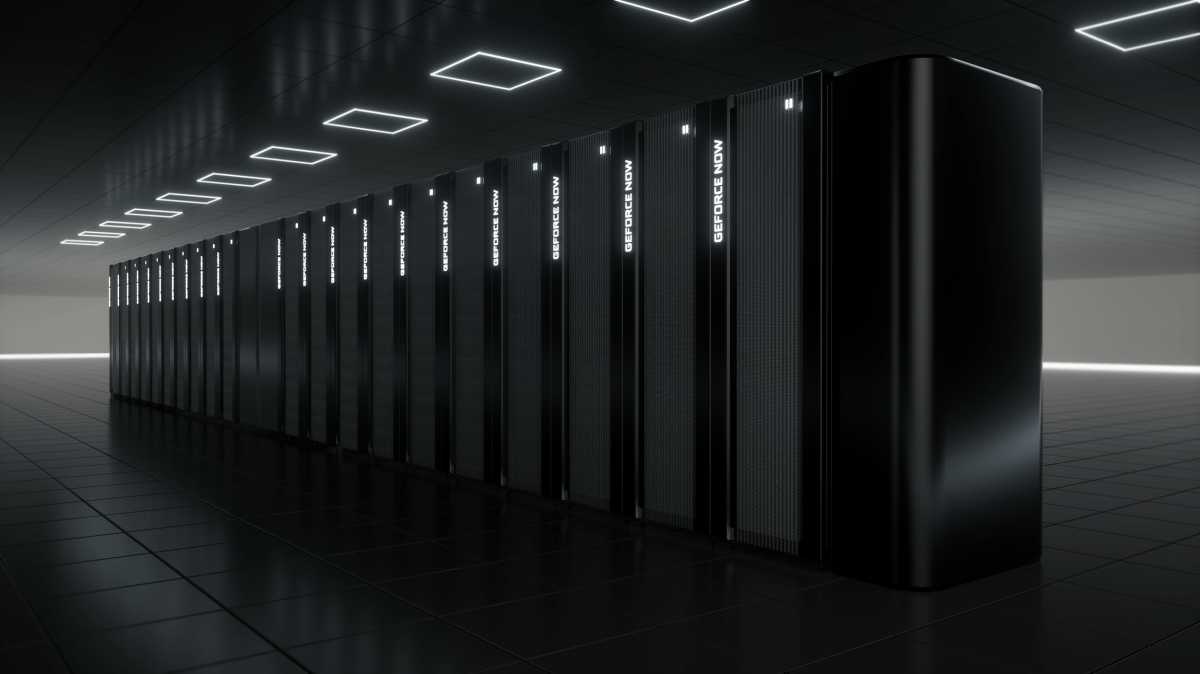 Nvidia needed to upgrade its servers to make such a ferocious option possible. The company's new GeForce Now Superpods double up on available CPU cores and memory bandwidth in addition to wielding the crucial GPUs themselves—which aren't truly RTX 3080 GPUs, but a similarly configured die based on the same underlying GA102 Ampere GPU. One key difference? The Superpod 3080s come with 24GB of VRAM, compared to the 10GB of GDDR6X found in the proper graphics cards.

Each virtual RTX 3080 PC comes equipped with an 8-core, 16-thread AMD Threadripper CPU, 28GB of DDR4-3200 memory, and a blazing-fast PCIe 4.0 SSD. So yeah, it'll be able to handle any game you throw at it without breaking a sweat. 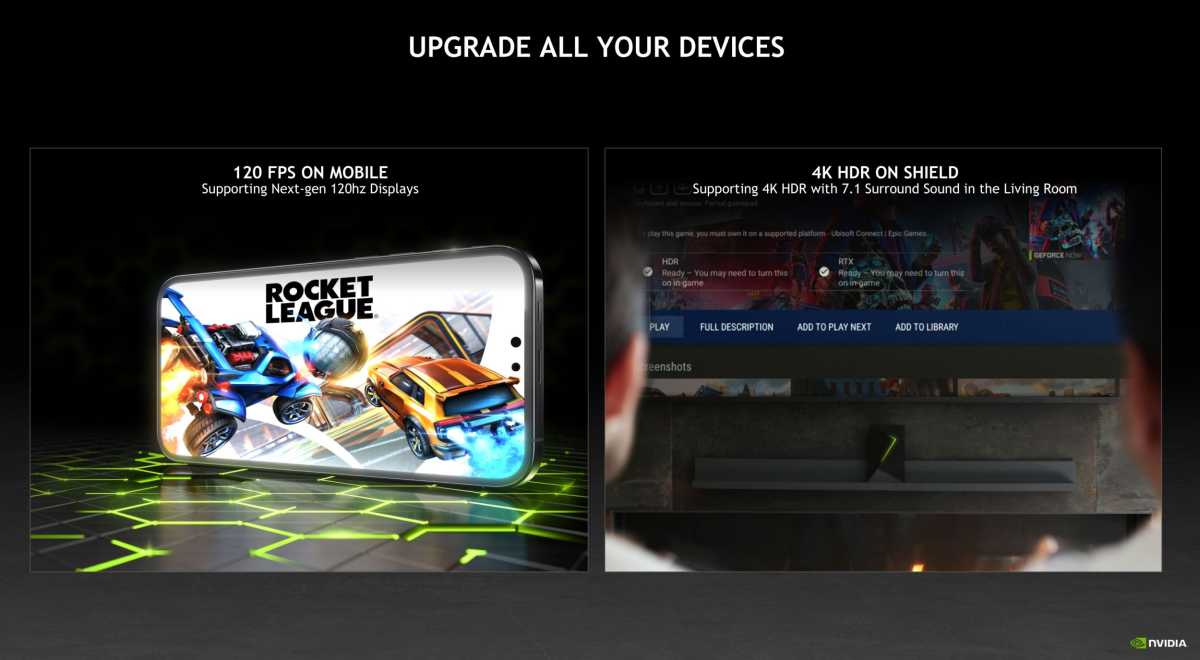 Nvidia is rolling out new display support options that put the heavier firepower to good use. Standard GeForce Now streams are limited to 60 frames per second at 1080p resolution, but if you pony up for an RTX 3080 subscription, you'll be able to stream at up to 1440p resolution and 120Hz. If you have a phone with a 120Hz screen, that's supported at the full refresh rate as well, though mobile access defaults to 720p resolution to avoid text elements being rendered unreadable on such tiny screens. (You can also manually enable 1080p resolution on a phone.) And if you're an Nvidia Shield TV owner, you'll be able to play HDR games at 4K/60, with support for additional devices expected in the future. 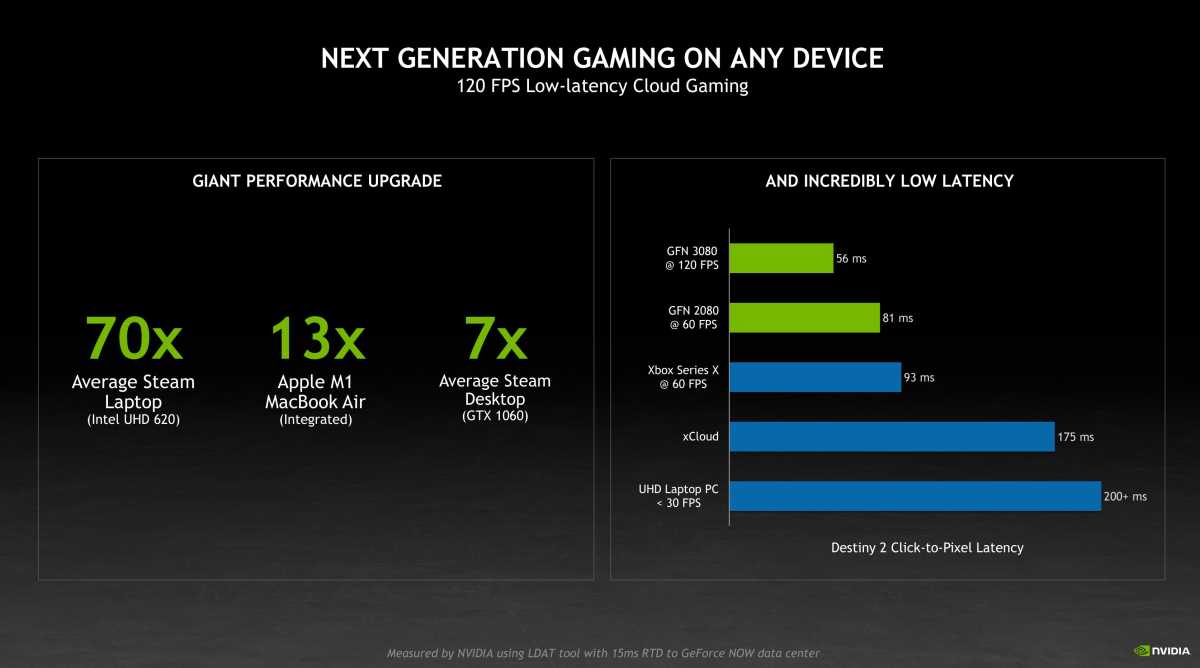 Playing at such high framerates should hopefully alleviate some of the latency issues that sometimes pop up with cloud gaming services, as highlighted by when my colleague Ben Patterson dropped GFN for a dusty PlayStation 4 to play Destiny 2. In fact, the Nvidia graphic above deals with that very issue in that very game, and how latency should be much improved when it's running at 120 frames per second from a remote RTX 3080.

Nvidia is also swiping a page from its G-Sync experience to offer an adaptive sync display option to all GFN users to increase gameplay smoothness, regardless of what type of monitor you're using. It doesn't work quite the same as G-Sync though; while G-Sync and other adaptive sync monitors smooth things out by matching your display speed to your GPU's output, GeForce Now's new adaptive sync technology matches the output of the server frame captures with your client's frame displays at either 60Hz or 120Hz. Cloud adaptive sync sounds exciting on paper, but the proof will be in the pudding when GeForce Now's RTX 3080s fire up. 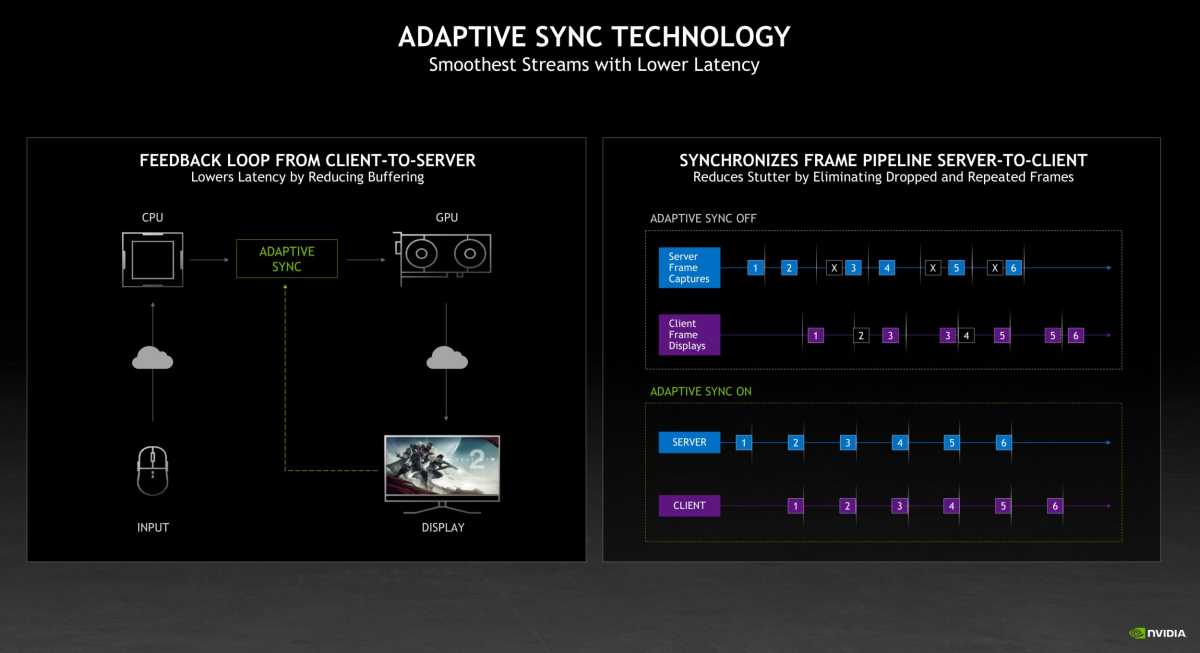 Subscribing to the RTX 3080 tier unlocks more benefits, too. While the free and standard tiers of GeForce Now handle overcapacity by dropping players into a queue system, Nvidia cloud VP Phil Eisler says no wait is the goal for RTX 3080 subscribers. While he acknowledged that customers might see the occasional short weight—for example, when a hot new online game launches—the company will actively manage the number of RTX 3080 subscriptions and virtual PCs available.

Unlike the other tiers, you won't bump down to a lower-spec'd virtual PC if you're playing a lesser-powered game. If you're paying for an RTX 3080 in the cloud, you'll always be playing on an RTX 3080 in the cloud. You'll also unlock longer eight-hour-straight gaming sessions, as well as the ability to save your graphics settings across sessions, rather than defaulting to an Nvidia-recommended configuration. Eisler said that latter benefit is a common request from users. It's good to see Nvidia listen, though it's a bummer that the capability is locked to the priciest subscription tier alone. 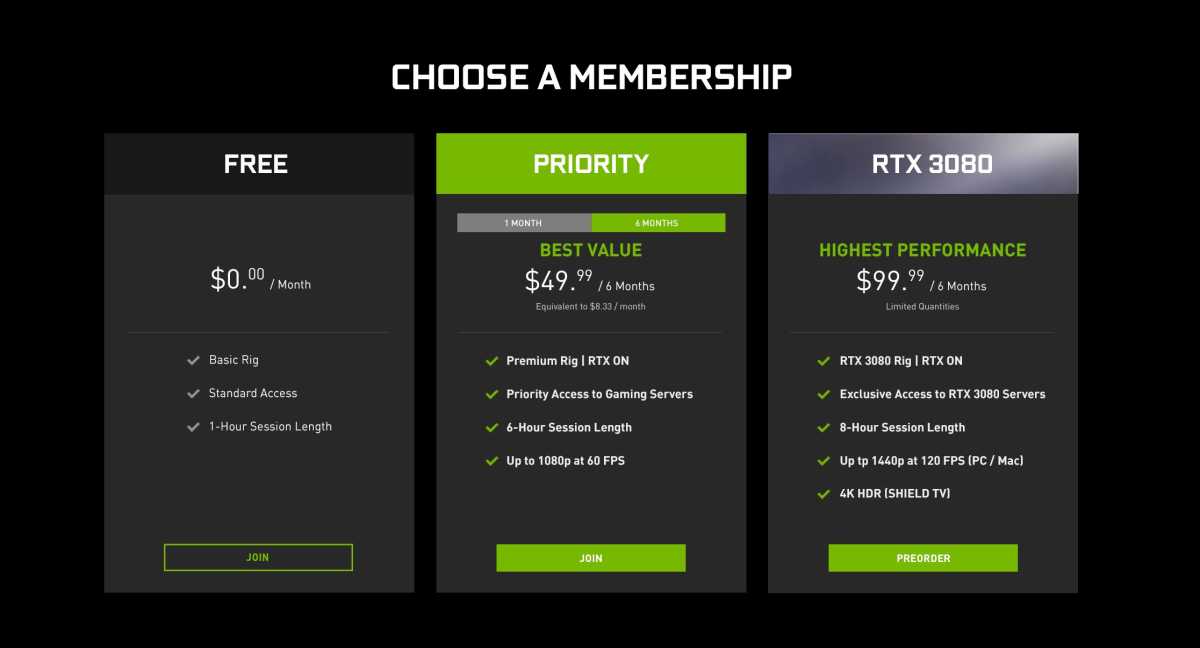 Now for the pricing. While the free tier remains intact with unlimited one hour session durations, complete with full access to your compatible PC library and over 70 free-to-play games, pricing for the premium tiers have crept upwards since GeForce Now launched a few years back. Earlier this year, pricing for Priority access doubled to $10 per month or $100 per year. That's staying the same under Nvidia's new plans, although the company is only offering six-month plans for $50 now. (Month-to-month pricing was not disclosed.) Paying for that juicy RTX 3080 subscription costs significantly more, at $100 for six months.

That breaks down to $16.66 per month—roughly splitting the difference between a standard and premium Netflix plan. A figure like that may seem high on the surface, but it feels like a fair price for unlimited access to a high-powered RTX 3080 rig during a time when finding graphics cards is all but impossible and actual 3080s are going for north of $1,500 on the streets. That $16 per month could help you keep on gaming until the GPU shortage subsides, and with some kick-ass firepower at your fingertips too.

Preorders for GeForce Now's new RTX 3080 plans start today in North America, with availability for other regions opening in a week. You'll be able to start playing on a cloud 3080 sometime in November. We normally say never preorder, but GeForce Now is a proven commodity and Nvidia is trying to keep wait queues down for RTX 3080 subscribers, so if you're interested, consider signing up.